Flames duel with top-ranked Sun Devils before falling in OT 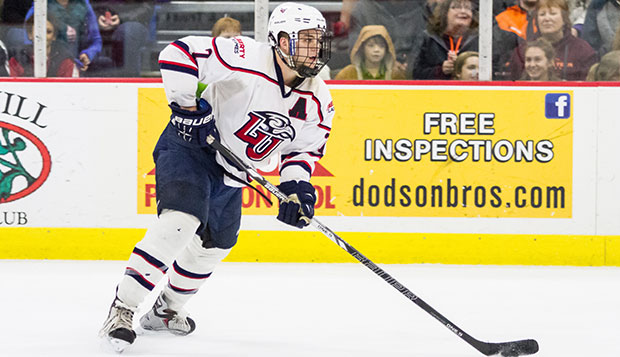 The last two times Liberty University's ACHA Division I men's hockey team played Arizona State University, the Flames dueled with the Sun Devils through overtime before losing in a shootout.

Thursday night at Oceanside Ice Arena near Tempe, Ariz., after engaging in another back-and-forth battle on ASU's home ice, a shorthanded Liberty squad was less than a minute away from taking a third straight showdown to a shootout before the Sun Devils scored the game-winner on a counterattack.

Challenging the No. 1 team in the ACHA , the fourth-ranked Flames (21-5) twice seized the lead on goals by junior forward and leading scorer Lindsay LeBlanc (early in the first period) and senior defenseman and assistant captain Jackson Kuhn (midway through the second) before allowing the Sun Devils (26-1) to strike back to tie it up minutes later both times.

The two teams waged a scoreless third period before ASU recorded its fourth overtime victory of the season, 3-2, on freshman forward Ryan Ostertag's 11th goal of the season with just 44 seconds left in the five-minute bonus period.

"Both teams played well and both goalies played well," Liberty Head Coach Kirk Handy said. "All in all, we liked our effort and our team discipline. They battled for 60 minutes hard and played 64 good minutes of hockey."

In the final minute of sudden-death action, Ostertag capitalized on a two-on-one break, deceiving Flames senior goalie Blair Bennett into thinking he was going to pass the puck before lifting a wrist shot into the upper right corner of the net.

"He made a nice shot," Handy said, noting the Flames weren't playing the overtime period to get into a shootout. "After 60 minutes, you're putting the pedal down and trying to win the game. In overtime, they were able to get one in, but we had opportunities to win, too. It was a very even game tonight."

The Sun Devils outshot the Flames 45-32, though Liberty had about as many quality chances as its hosts.

LeBlanc moved into a tie with senior captain Andrew McCombe for the team lead with his 13th goal of the season just 1:23 after the opening faceoff. That was less than a minute after the first of 42 saves by Bennett – off a point-blank backhander from sophomore forward Kale Dolinski, the ACHA's points leader.

LeBlanc finished a crossing pass from junior forward Ryley Egan deep in the right circle, beating Sun Devils freshman goalie Robert Levin (the ACHA's leader with a 1.02 goals-against average, a 0.96 save percentage, and five shutouts) to lift Liberty to an early 1-0 lead. But ASU's Zachary Holstrom tied it up 1:13 later, seconds after fellow freshman forward Tommy Cooney won a faceoff in the left circle and sent him a pass across the cage from deep in the right.

Just over six minutes into the second period, with Liberty on a power play, Egan became the Flames' fifth-leading scorer after assisting Kuhn, who ranks fourth, in the right crease. However, that lead was once again short-lived as the Sun Devils evened the score at 2-2 when Dolinski recorded his 55th point. He scored his 17th goal (he also has 38 assists) in the final 30 seconds of a three-minute power play, just 20 seconds after Liberty had killed a 5-on-3. Dolinski put away a beautiful assist from senior forward Colin Hekle, who skated behind the net before sending a quick feed across the crease.

Liberty had the advantage in puck possession for much of the rest of the second period and held its own throughout the third, with sophomore forward Bram Erickson's shot glancing off the corner of the cage 3:30 into the period before sophomore forward DJ Dinnison had his attempt — set up by Kuhn's crossing pass on a three-on-one break — denied by a defender at the end of a power-play opportunity midway through the final stanza.

Handy was pleased with the energy and performance level from his players, who were not entirely dejected by the defeat.

"There's no consolation," he said. "There's no moral victory. We're disappointed we didn't win. But we continue to take steps forward as a program and right now, that's critical."

ASU, which improved to 4-0 against Liberty, will visit the LaHaye Ice Center for its first two games there next Friday and Saturday.

"We definitely learned some things tonight and will make some changes for (this weekend's series at Arizona, in nearby Tucson)," Handy said. "It was definitely a good building block. It'll be two great games next weekend, for sure."