No. 4 Flames flying out west for three games in Arizona 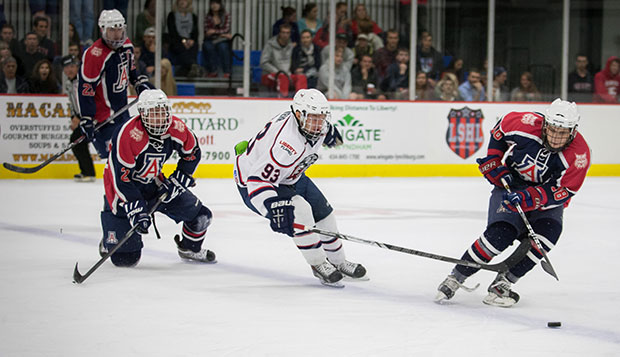 Just two days after returning from Long Island, N.Y., where it salvaged a split with Stony Brook on Sunday, Liberty University's ACHA Division I men's hockey team flies out to Phoenix, Ariz., Wednesday morning for its second-to-last road trip of the season.

The Flames, No. 4 in last week's ACHA DI rankings, will challenge No. 1 Arizona State on Thursday in Tempe before traveling 100 miles down Interstate 10 for games Friday and Saturday against No. 16 Arizona in the Tucson Convention Center.

Handy isn't concerned about his team's recovery time from this past weekend's trip to New York, or the jetlag from flying to Arizona.

"We're going to practice Thursday morning and we will be ready to play Thursday night," he said. "We're looking forward to the challenge."

He's not even daunted by the prospects of containing ASU's attack, the highest-scoring offense in ACHA DI with 153 goals (5.88 per game).

"Both of lineups have multiple people who can put the puck in the net," he said of the Flames, who rank 10th in ACHA DI with 117 goals, and the Sun Devils. "We can't control what the other team does or doesn't do. We want to always be improving as a team and making sure we're as prepared as we can be."

ASU (25-1), which suffered its first setback of the season Saturday against Oklahoma, won its first 24 games and overtook Minot State at the No. 1 spot after Arizona upset the Beavers on Nov. 8. The Sun Devils have remained there for the past nine rankings, with the 15th poll due out on Wednesday.

Wildcats Head Coach Sean Hogan led Oakland (Mich.) to an ACHA DII national championship with a win over Liberty in the 2006 final and guided the Grizzlies to an ACHA DI national crown the very next year.

"We have a great history and a tremendous amount of respect for each other's programs," Handy said.

Liberty scouting report: After winning 17 of their first 18 games, the Flames have lost three of their last seven games heading into a challenging final 12-game stretch of the season in which they will face ASU three times (including next Friday and Saturday at the LaHaye Ice Center) and Delaware and Oakland twice each.

The Flames showcased their depth in both the offensive and defensive zones in Sunday's 5-3 win over Stony Brook when they got just one goal from a player in their top eight point leaders, senior forward and team captain Andrew McCombe (third with 13 goals, 17 assists).

Defensively, playing without three of its top players, the Flames still managed to hold Stony Brook to just one goal over the final 58 minutes, when senior goalie Blair Bennett made 37 saves.

Bennett and freshman Matt Pinel have platooned in goal with equal success, with Bennett going 11-2 with a 2.39 goals-against average and 0.91 save percentage and Pinel posting a 10-2 record with a 2.92 GAA and 0.90 SP.

Arizona State scouting report:  The Sun Devils feature the league's top scorer, sophomore forward Kale Dolinski, who has scored 16 goals and distributed an astounding 38 assists. On a roster that has 16 players in double-figures in points, senior forward Brian McGinty (12G, 20A) and junior forward Liam Norris (8G, 24A) are tied for second with 32 points followed by Colin Hekle (18G, 8A), Danny McAuliffe (14G, 11A), and Sean Murphy (12G, 13A).

As volatile as its attack is, ASU may be even stronger on defense, especially in the cage where it rotates three goalies who have allowed fewer than 1.5 goals per game. Freshman Robert Levin (13-1) has logged the majority of the minutes, recording five shutouts on the season, with a 1.02 GAA and 0.96 SP, ranking first in the ACHA in both departments. Senior Joseph D'Elia has put up impressive numbers as well, going 11-0 with a 1.45 GAA and 0.93 SP.

Arizona scouting report:  After playing their first nine games on the road, including two at Liberty on Oct. 11-12, the Wildcats are on the tail end of a 23-game homestand. Arizona hosts San Diego State next weekend before playing six of its final eight games away, returning to Tucson for its fifth and sixth games against rival ASU (which has won the past 36 meetings) to cap the season.

The Wildcats have survived the second-toughest schedule in the ACHA, one reason they are still in the top 20, where they ended last season. They have fared especially well against oddly ranked teams, upsetting then-No. 1 Minot State, the defending national champion, on Nov. 8, and winning three games against Oklahoma — twice when it was ranked No. 3 (Oct. 18-19) and last Thursday when the Sooners were at No. 5. They have not been as successful against evenly ranked teams, being swept by ASU on Oct. 4-5, when the Sun Devils were ranked No. 2, and Iowa State on Nov. 22-23, when the Cyclones were ranked No. 4.

All-time Series: Liberty is 0-1-2 against ASU, losing shootouts to the Sun Devils in the past two seasons, one that went eight rounds last Jan. 10. The Flames are 6-2 against Arizona, winning three of four from the Wildcats last year including back-to-back third-period comeback victories Jan. 11-12 in Tucson.

Coaches: Kirk Handy, in his 14th season as Flames head coach, reached a milestone with Sunday's victory at Stony Brook that gave him a career record of 300-125-13. Greg Powers, in his fifth season at Arizona State, boasts a 138-26-7 mark after leading the Sun Devils to their first No. 1 national ranking and ACHA DI Final Four appearance last season. Arizona coach Sean Hogan is 38-57-2 in his third season with the Wildcats.