Lady Flames strike first before striking out at Grand Valley 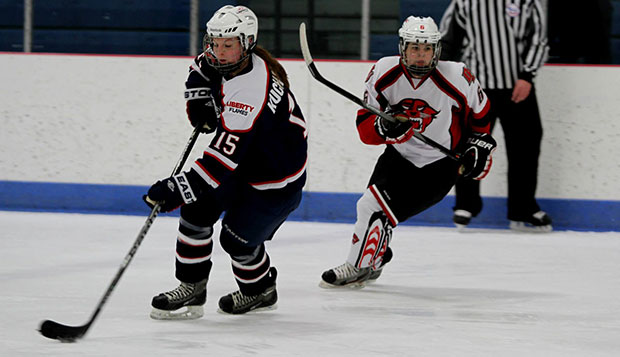 But the Lady Flames failed to finish after that, as they were shut out for the final 59 minutes, 49 seconds of a 2-1 loss to the Lakers.

"It was a heartbreaker," said Liberty Head Coach Paul Bloomfield, whose team is trying to rise from the No. 10 spot in the ACHA DI rankings by the time the third of four polls is released Jan. 26.

GVSU (12-5, ranked sixth) outshot Liberty 49-20 for the contest, using its speed to its advantage to spark its transition game.

"They're a quick team, not very big, but very quick on transition," Bloomfield said. "We were a lot bigger and I thought a lot stronger team, but they were just really quick. They just were kind of everywhere and they were just good skaters."

Sophomore Kristina Toppazzini started her third straight game in goal for Liberty and made 47 saves. But it wasn't enough to complete the sweep on the Lady Flames' final road trip of the season, after posting lopsided shutout wins at Ohio State on Thursday and Davenport on Friday.

Lakers freshman forward Allison Lowe tied the game at 1-1 with 3:16 left in the first period before sophomore forward and leading scorer Kendra Myers converted the game-winner with 16 minutes remaining in regulation.

"On the second goal, we had a turnover in the blue line, made a mistake and they got a goal off it," Bloomfield said. "They were probably one of the best teams that we've played. I thought our team played really well. We played with them and when it was in their end, we dominated. We just couldn't get the bounces that we needed."

Liberty was called for three penalties in the first period, but didn't have another the rest of the way.

Bloomfield pulled Toppazzini late in the contest to give Liberty a six-on-five advantage, but it couldn't net the equalizer.

"We had a lot of heat on them and trying to pull out that extra goal," Bloomfield said. "We controlled the play and it was in their end, but just couldn't put it in the net."

The Lady Flames have two weeks to prepare for top-ranked Miami, a team GVSU split with earlier this season. Liberty hosts Miami Jan. 23-24 at the LaHaye Ice Center.

"I feel good about playing Miami at home and I'm really hoping we do well against Miami because that will bring us up in the rankings," Bloomfield said, noting the top eight teams in the final poll on Feb. 23 make the ACHA DI national tournament.

The Lady Flames, who should be arriving back on campus around noon Sunday, expect to have sophomore forward Catharine Burrell back from injury by the time they host No. 7 Northeastern on Jan. 31 and Feb. 1 They then conclude their regular season with two games against Davenport on Feb. 7-8 and one against the Tri-City (N.C.) Selects on Feb. 23, all at the LaHaye Ice Center.