Fifth-ranked DII Flames upset by No. 7 PSU in 2014 opener 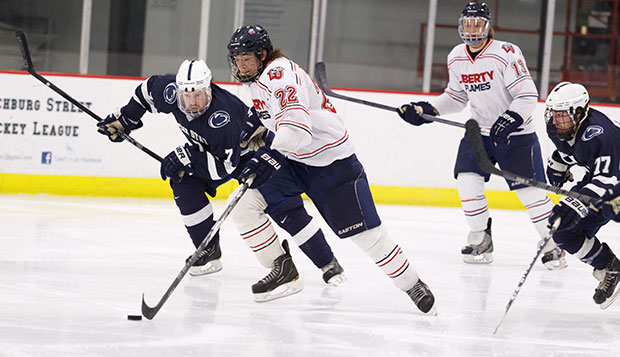 Sophomore forward Jeff Boschman (22) drew the Flames back within 4-3 with a goal late in the second period against the Nittany Lions, Friday night at the LaHaye Ice Center.

Liberty University's ACHA Division I men's hockey team, which boasted the best record in the Southeast Region, opened 2014 action with one of its toughest tests of the season, third-place Penn State University, Friday night at the LaHaye Ice Center.

The two teams staged a competitive showdown befitting their rankings – the Flames (20-5) are fifth and the Nittany Lions (16-4-0-2) seventh in the latest Southeast Region poll – before Penn State pulled away for a 6-4 victory.

Liberty rallied from an early deficit to take a 2-1 lead by the end of the first period. But the Flames couldn't overcome a five-minute penalty spanning the second and third when the Nittany Lions scored twice – the last on a five-on-three power play – to extend their advantage to 6-3.

"We knew that was going to be huge," Liberty Head Coach Chris Lowes said. "We'd either kill it and get momentum or give up a couple goals and a three-goal deficit against a good team is tough to overcome in the third period. They had three power-play goals on the night, and that was the difference. They executed. Good teams like that are going to put pucks in the net, especially on a five-minute major."

PSU got on the scoreboard first when Neil Laessig put away a puck near post from in the right crease with 10:35 remaining in the first period. But the Flames responded three minutes later when senior forward Brad Docksteader launched a shot from near the blue line along the right wall that Nittany Lion goalie Teddy Steinhart batted down with his glove. Liberty senior forward Bobby Cervone backhanded home the rebound in the left crease, tying the game at 1-1.

Three minutes after that, the Flames captured their first lead when freshman forward Jordan Barstead distributed a pivot pass from behind the endline to junior forward Johnny Cotton, who slammed in the go-ahead goal from just inside the left circle to make it 2-1 with 4:21 left in the first.

The Nittany Lions pounced on Liberty in the second period, scoring the first three goals to go up 4-2 midway through. After leading scorer Ryan Urban tied it at 2-2 a minute and a half into the period when the Flames failed to clear the puck, PSU tallied twice more in a span of 21 seconds – on a power play goal by Chris Lewis and a breakaway score by senior forward Peter Daley.

"They had more odd-man rushes and high-end scoring chances," Lowes said. "They played pretty solid defensively and we had to work hard for our four goals."

Liberty drew back within 4-3 just under the 5:00 mark when Jeff Boschman posted up in the left crease on a power play and put away a crossing pass from Cervone set up by sophomore forward Peter Kazmierczak.

But when officials dealt sophomore defenseman Parker McIntyre a five-minute non-releasable penalty on a check from behind with 14 seconds left in the period, the Flames had to play defensive hockey to start the third.

Just a minute in, Daley, positioned in front of the cage, scored his second goal into the upper netting after taking a short pass from Tyler Person skating left to right behind the net. Then, with 17:08 remaining in regulation, senior defenseman Chris Dinsmore capitalized on a two-man power play by putting away a rebound wrist shot from just inside the right circle to give the Nittany Lions a three-goal advantage before Liberty's Paul Ingles added a late score.

Liberty returns to LaHaye on Saturday for a 6 p.m. faceoff against West Virginia.