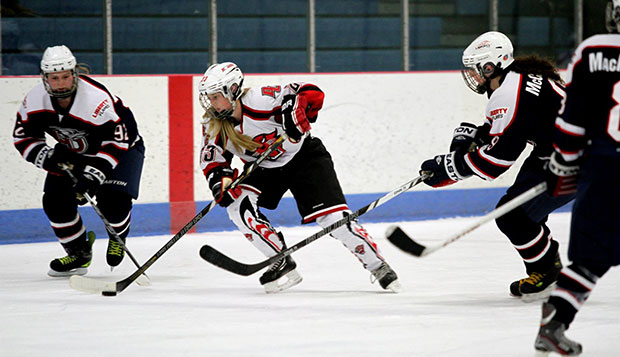 Lady Flames forwards Courtney Gilmour (left) and Nikki McCombe close in on a Davenport player during their 5-0 victory over the Panthers on Friday at the Patterson Ice Arena.

Kristina Toppazzini, sophomore goalie for Liberty University's ACHA Division I women's hockey team, saw a lot more action in Friday afternoon's 5-0 victory over Davenport at the Patterson Ice Arena than she had the night before at Ohio State, when she made just two stops in an 11-0 triumph over the Buckeyes late Thursday night.

Against the Panthers, Toppazzini made 20 saves, deflecting a flurry of shots late in the second period, to preserve her second consecutive shutout.

The Lady Flames (9-6-4) actually topped their shot total from the night before, putting 44 pucks on net against the Panthers (7-11), a first-year program, after firing 42 shots on goal at OSU.

After scoring one goal in both the first and second periods, Liberty broke the contest open with three goals in the third off Panthers goalie Victoria Smishek, who made 39 saves.

Sophomore forward Carrie Jickling recorded the Lady Flames' first two goals, skating the puck from center ice to the left wing before launching a shot past Smishek to break the scoring ice with 5:17 left in the first period.

Jickling then used a teammate's screen to maneuver around Davenport defenseman Megan DeVries and start a breakaway off an assist from freshman defenseman Marissa Graham. Jickling capitalized on the one-on-one past Smishek for a 2-0 lead with 14:22 remaining in the second period.

Junior forward Sarah Stevenson, who scored a hat trick at Ohio State, extended Liberty's lead to 3-0 by finishing a feed from Jickling just 41 seconds into the third period. Senior forward Nikki McCombe added an unassisted goal seven minutes later before Graham capped the scoring with 7:55 left off assists from freshman forward Nicole Douglas and junior forward Stephanie St. Amand.
Liberty, ranked No. 10 in the second ACHA DI national poll, concludes its final road trip of the season Saturday at No. 6 Grand Valley State in Hudsonville, Mich., where the puck will drop at 5:30 p.m.