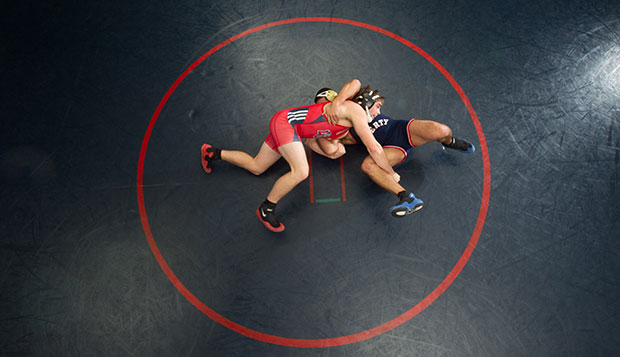 Liberty wrestlers spar at a recent practice in the Wiseman Wrestling Room. The Flames return to practice Sunday in preparation for next weekend's Virginia Duals in Hampton.

The Flames, members of the National Collegiate Wrestling Association, traveled with 16 of their top wrestlers for the two-day event. Eleven of them placed in the top eight in their respective weight classes, most of which featured 16 competitors.

"We had a solid performance from the team, coming off a Christmas break," Liberty Head Coach Jesse Castro said. "I was really pleased. That should ready us for the upcoming Virginia Duals (Jan. 10-11 at the Hampton Coliseum)."

Diehl was the Flames' only wrestler to finish 4-0, capturing his third consecutive tournament championship. He pinned Mount Union's Nathan Kirk in 4 minutes, 40 seconds in the first round before recording technical falls of Case Western's Jeff Gould and Cornell's Phillip Opelt and scoring a 7-2 decision of Mount Union's Jeremy Border in the final.

"Ryan was impressive," Castro said. "Even as a Division I program, he's probably the best kid to wrestle for us as a freshman. No one's ever done that before, win three tournaments in a row."

Thompson, last year's NCWA national tournament runner-up and 2012 champion, won all three of his matches in only his second competition since returning from off-season knee surgery. He pinned Cornell's James Garrett in 2:23 and scored a technical fall over Mount Union's Lucas Dies before edging Mount Union's Nick Rajcsak, 5-3, in the final.

Ward, in his first tournament back since an injury at the Joe Parisi Open, also finished 3-1, scoring a 12-2 major decision over Nate Marsh of Ursinus before notching a 9-2 decision over Nick Miller of Mount Union and a 9-5 decision over David Brunk of Case Western in the semifinals. He eventually lost to Cornell's Brent Hamm, 4-0 in the final.

Liberty competed without injured senior Royal Brettrager (184) and junior Chase Boontjer (157), who was home for the holidays in California.

The majority of the Flames will return to Lynchburg this weekend.

"We're going to be bringing kids back on the fifth for a Sunday evening workout, and then hold two-a-day practices until the time we leave (for the Virginia Duals) on Thursday," Castro said.