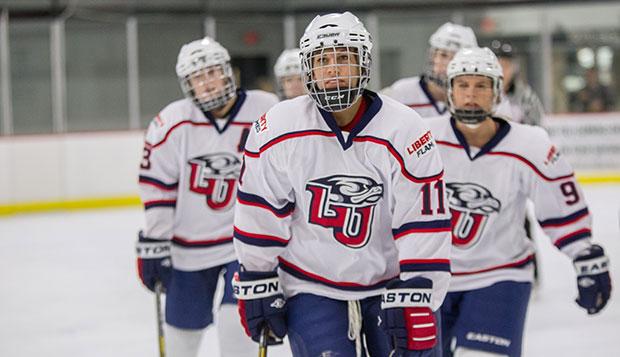 Junior forward Sarah Stevenson netted the Lady Flames' first goal of the series off an assist by freshman defender Marissa Graham. Stevenson is the current point leader for Liberty with seven (one goal, six assists). UMass outshot Liberty 30-25. Goalie Samantha Rupp, a junior, went the distance between the pipes for Liberty, making 26 saves for a 0.867 percent save percentage.

On Tuesday, Liberty junior Amanda Grainger put in her third goal of the season, assisted by senior Laura Del Monte and Graham. Junior goalie Chantal Lischynski played the entire game for the Lady Flames, stopping 26 shots. One of UMass' goals came on an empty net in the third period. The Lady Flames were outshot 29-20 in the contest.

"Our team played particularly well (Tuesday) night," said Lady Flames Head Coach Paul Bloomfield. "UMass is probably the best team we have played this year. It is hard to play four games in five nights on the road but I am not making excuses. They outplayed us in the first game and we just didn't have the opportunities on Tuesday."

The pair of losses put a bitter cap on an otherwise successful road campaign. A day after debuting at No. 10 in the first ACHA ranking of the season, the Lady Flames upset No. 2 Rhode Island with a shutout victory on Nov. 22. The next night, Liberty concluded the series with a tie after a narrow overtime miss.

"The first game at Rhode Island, we controlled the whole game. The second game was more of a battle, but I felt that given the right bounces we could have won it," Bloomfield said.

Liberty has wrapped up the 2013 portion of its season and will return to action Jan. 9 at 10 p.m. when the Lady Flames host Ohio State at the LaHaye Ice Center.