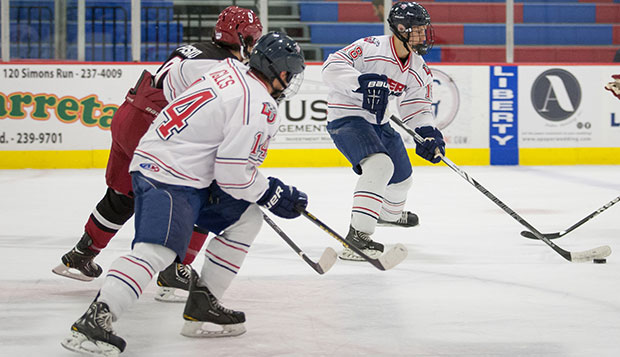 Liberty University's ACHA Division II men's hockey team let a 4-2 third-period lead slip away against North Carolina State University before winning in the fourth round of a shootout, 5-4, Sunday afternoon at the LaHaye Ice Center.

The Flames (19-4) finished 2-1 in their ACHA DII Showcase, rebounding from Friday's 3-1 loss to Ohio with an 8-0 victory over Monmouth (0-10) on Saturday as Cary Byron notched his first shutout since moving up from the DIII team. They then survived a much stiffer test from the defending ACC champion Wolfpack (10-4).

"It was a shot from the point and I tipped it in from right in the middle of the hash marks," Docksteader said.

Junior defenseman Clinton Nigh, sophomore forward Paul Ingles, and senior forward Brad Docksteader also scored for Liberty before it allowed the Wolfpack to rally for two goals in the final 10 minutes.

"The last goal bounced off a slap shot from the point off my defender's shin pads and it rolled in right behind me," Gortman said. "That tied it up with about five minutes remaining and forced the overtime."

"We let them come back and let down at the end," Devon Docksteader added. "We should have beat them by a lot."

Liberty missed a couple power-play chances in the final 22 seconds of the five-minute overtime before Brad Docksteader netted the first goal for either team in the third round of the shootout, skating in and deftly depositing the puck through the five-hole of Wolfpack goalie Nick Kamaris.

N.C. State senior forward Mike Reisland tied it back up, drawing Flames sophomore goalie Justin Gortman out of the cage before putting away a backhanded shot from the left crease.

Liberty freshman forward Jordan Barstead then coolly tucked the game-winner into the top right corner after skating in from the right, faking Kamaris to the left and lifting the puck into the upper netting. Gortman showed quick reaction time with a glove save of Garrett Sunda's high wrist shot from point-blank range in the right crease, preserving the victory.

"Normally when I come out, I'll make a couple reads on a player depending on where they're coming in and where the puck is," Gortman said. "If the puck's to the side of their body, I figure they might take a shot, but if it's out in front of them, I'm assuming they're going to try to deke on me. So I'll go out to meet them near the hash mark and then match the player's speed coming back to the net so they don't beat me on the backside."

Liberty returns to LaHaye for two games against Indiana University of Pennsylvania on Dec. 6-7, its last two games of the semester, before hosting Penn State University on Jan. 10.