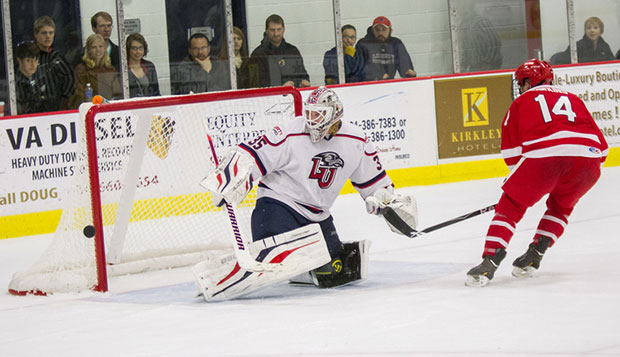 In the third and final contest of the second annual Blue and Gray Cup, commemorating the sesquicentennial of the Civil War, Liberty University's ACHA Division I men's hockey team lost its second game in a row for the first time this season, Thursday night at Davenport University's Patterson Ice Rink in Grand Rapids, Mich.

Playing on the road for the first time since Oct. 5, the Flames (17-3) scored first with four minutes remaining in the first period before allowing the Panthers (8-6-1) to net three unanswered goals over the next 15 minutes in a 3-1 setback. Fortunately, Liberty had already clinched the best-of-three series with a two-game sweep last month in Lynchburg.

"We had a slow start tonight and didn't play very well," Flames Head Coach Kirk Handy said. "We let Davenport take the game to us. In the first period we had a great opportunity, a five-minute major penalty, and we didn't generate many shots at all. We were kind of lethargic and we only had five shots in the first period."

Moments after Davenport's five-minute major penalty expired, with four minutes left in the first period, Liberty sophomore defenseman Steven Bellew capitalized on a breakaway out of the defensive zone.

"Bellew picked the puck up on the neutral end and went all the way up the ice and scored from between the hash mark and the top of the circle," Handy said. "It was a great goal."

But the Flames experienced a defensive lapse at the 3:31 mark, allowing the Panthers to counterattack and tie it right back up on goal by senior defenseman Phil Wendecker, who beat Liberty senior goalie Blair Bennett.

"They scored on the very next shift," Handy said. "We held the lead maybe for 30 seconds."

Then, fairly early in the second period, Davenport took the lead for good on a penalty shot by sophomore forward Stephen Flood, who was slashed from behind by Flames junior defenseman Cam Bakker on a breakaway.

The Panthers outshot Liberty 32-29 for the game and sophomore forward Matt Ogden tacked on an insurance goal midway through the second period for the final score.

"We didn't seem to be able to find our game," Handy said. "We had nine shots on goal in the second period and in the third period, we actually played our best (adding 15 shots). We weren't able to score, but we had some good opportunities."

The Flames will travel to Rochester Hills, Mich., for Friday and Saturday's games against Oakland University at the ONYX Ice Arena. That's where the Golden Grizzlies (11-8) swept the Panthers in a two-game series last weekend.

"(Friday's) a new day and we're looking forward to it," Handy said. "We have to have a better start. We want to generate more shots and play in their end a lot more. We want to establish our four lines (on Friday)."