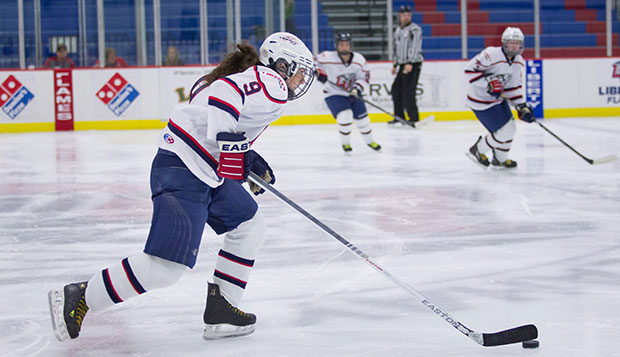 Senior forward Nikki McCombe skates the puck up the ice at the LaHaye Ice Center.

Liberty University's ACHA Division I women's hockey team's home rematches with the U-19 Reston Raiders were even more dominating than the two games played late last month in Reston, won by the Lady Flames by 10-0 and 7-1 scores.

Saturday afternoon in the LaHaye Ice Center, Liberty (6-4-3) outscored the Raiders by the combined total of those two games, winning 18-0, before completing the sweep with a 5-0 shutout on Sunday.

"I really don't like the blowouts, but it gives us the opportunity to work on some of our weaknesses," Lady Flames Head Coach Paul Bloomfield said. "We used it as an opportunity to work on certain breakouts and defensive plays, some of our special teams, stuff that we want to add to our portfolio. It's tough to work on those things against the better teams because if there's a breakdown, obviously it's detrimental."

After the Lady Flames scoring blitz on Saturday, Liberty played their guests to a scoreless first period.

That stalemate was short-lived, however, as Liberty exploded for four goals in a seven-minute span midway through the second period. Senior forward Laura Del Monte sent a pass to Jenny MacArthur whose shot was kick saved in the lower right corner before Del Monte slammed home the putback, breaking the scoring ice at the 13:20 mark.

Less than four minutes later, sophomore forward Carrie Jickling made a steal at mid-ice and sent a short pass to freshman forward Courtney Gilmour who pushed the puck out to junior forward Sarah Stevenson on the left wing where she lifted a wrist shot into the upper netting just under the crossbar.

The Lady Flames made it 3-0 a minute and a half later when freshman defenseman Marissa Graham scored off a fast break, sneaking a left-handed wrist shot from in the left circle past the goalie's glove and inside the right post.

Stevenson, stationed in front of the net, completed the second-period scoring surge by finishing a feed from behind the cage by Gilmour and later put away a backhanded shot into an open net in the right side of the goal mouth fr the only goal of the third period.

"That's got to be pretty close to a record for most points in a game," Bloomfield said.

Stevenson, meanwhile, had five goals and three assists to go with her hat trick on Sunday.

The weekend series served as a tuneup for next week's road trip to Rhode Island and Massachusetts.

"Next weekend is absolutely huge just because of where we are," Bloomfield said, noting the season's first ACHA DI rankings are due to be released next Sunday night. "Both of those teams are top-10 teams and where we end up in the rankings is probably going to depend mostly on however we show up and play and what happens next weekend."