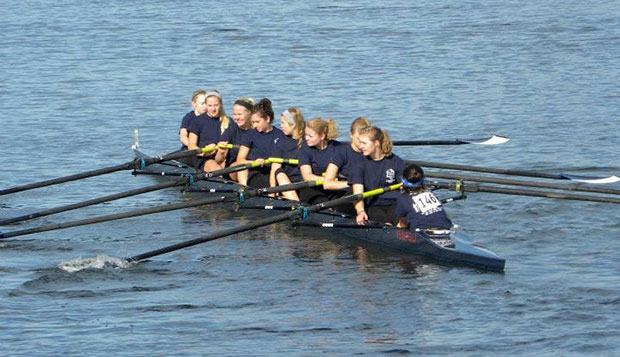 The women's championship eight boat rows out to the start of the course at Saturday's Head of the South on the Savannah River in Augusta, Ga.

Following an overnight frost, temperatures rose into the mid-60s by mid-morning and reflections of fall colors off the water made for a great day of racing for Liberty University's crew team, Saturday at the Head of the South in Augusta, Ga.

First-year Head Coach Sarah Morris was thrilled to see the majority of her team's members finally have the chance to get their oars wet in their first real regatta of the fall.

"We had nine boats entered in 18 races total," Morris said. "This was the novice rowers' first race and I was super excited. They did exceptionally well. The varsity teams were really good at stepping in and helping out as well and we had a few medals at the end of the day after some exceptional rowing."

Combined, Liberty's men's and women's teams earned 37.5 points, placing them 20th out of the 47 teams that scored in the regatta, won by host Clemson University with 269 points. Complete team and individual race results are available online.

The Lady Flames' women's championship eight boat racked up nearly half (18) of Liberty's points by finishing second in the final race of the day, as darkness descended on the Savannah River.

"Our women's and men's championship eight races were the highlights of the day, especially medaling on the women's side, which was a really big deal for them," Morris said.

Sophomore Ron Beimel served as coxswain for that boat and junior Kylie Peterson rowed in the stroke seat, setting the pace and leading the team.

In the preceding men's championship eight final, Liberty — led by sophomore stroke seat rower Joel Buckhalt on a boat coxed by junior Taylor Hardin — pulled out a fourth-place finish in 16:49.07, the fastest time the Flames have ever clocked on that course.

"It wasn't as big as the Head of the Charles (the largest regatta in the United States held Oct. 19 in Boston), but there was some good competition," Morris said. "William & Mary was there, which is the closest competition we've had in the past, along with Wake Forest and the University of Georgia."

"Clemson won the most races," Morris said. "It was good to be able to measure ourselves against them as well as Georgia."

Morris was particularly proud of Liberty's women's collegiate and club novice eight boat, which placed fifth out of 12 boats in the morning final in 20:03.70.

"The novice women's eight boat did exceptionally well," Morris said. "Everybody there said it went better than most of their practices. They all stepped up. It was really exciting."

Liberty also got some strong performances from its smaller boats.

"We had some singles and double races and even entered some mixed boats, as well," Morris said.

Soon after the ice thawed off the Flames' sculls, Connor Houston placed third in 22:20.41 in a men's masters single race that initiated the day's competition for Liberty at 8:40 a.m.

Houston later teamed up with fellow senior captain Mitchell Dieudonne for another third-place showing in the men's club doubles final in 21:17.44.

"That's the hardest race because each person has one oar and it's easy to tip the boat over," Morris said. "They jumped in and had fun with it and came in third out of five boats."

The Head of the South was Liberty's final regatta of the fall season and Morris said it was a good note to end on as the team prepares for the spring sprint season, when the courses are shortened to 2,000 meters.

"If you compare it to running, this was the distance season and the spring will be more of a sprint when we'll get the athletes to see how hard they can sprint for 2,000 meters," Morris said. "They're headed in the right direction as long as they keep up their fitness through the winter months. When we get back for next semester, we'll do about six weeks of indoor training until it gets warm enough to be out on the water" for practices at the 1,500-meter Ivy Lake in Bedford County.