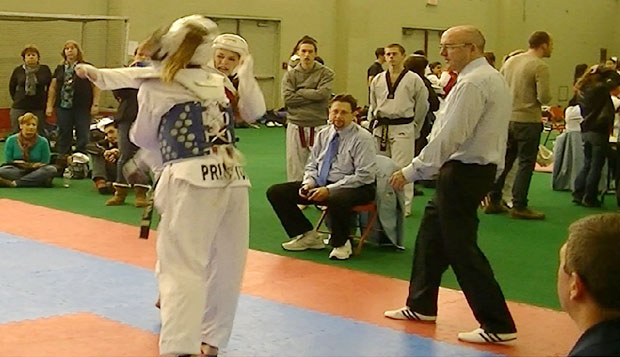 Lady Flames black belt competitor Riana Turner, a sophomore, lands a kick to the head of her rival from Princeton in a heavyweight division match.

More than 20 college teams participated in the event.

"This is a well established conference that has been holding competitions for over 30 years and includes over 30 colleges, most of which are Ivy League schools such as Penn State, Harvard, Princeton, Syracuse, Yale, and MIT," Liberty Head Coach Jesse Wilson said.  "We are very excited to now be considered a member of this league and we did well overall considering this is our first time in the league. I am very pleased with their performance."

The Lady Flames' women's black belt tandem of Riana Turner and Dani Gallagher finished fourth in its division with Turner, fighting in the heavyweight division, delivering a powerful kick to her opponent from Princeton. Gallagher, meanwhile, dominated her middleweight division challenger, also from Princeton.

Andrew Baab finished fourth in the men's intermediate forms division, in which competitors demonstrate skill and technique in forms by performing a choreographed set of punches, blocks, and kicks.

"While we did not place in the men's or women's intermediate divisions, our teams did very well and gained a lot of experience," Wilson said. "We will use the next several months to learn from our mistakes, re-evaluate where our strengths and weaknesses are, and train for our next ECTC competition, tentatively set for April at Rensselaer Polytechnic Institute."