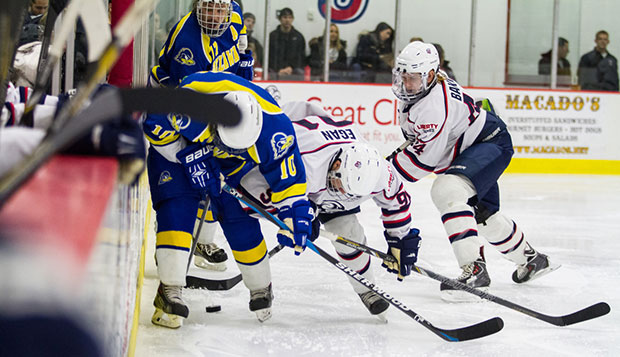 Flames junior forward Ryley Egan (91) works along the boards beside junior defenseman Cam Bakker at the LaHaye Ice Center. Egan scored the winning goal in the fifth and final round of a shootout to complete a sweep of fourth-ranked Delaware.

Lindsay LeBlanc has a knack for being in the right place at the right time and cleaning up pucks in front of the cage.

For the second night in a row, the junior forward lifted Liberty University's ACHA Division I men's hockey team to a 1-0 lead over No. 4 Delaware (11-4-1) and later netted the tying goal in dramatic fashion in the final minute of regulation. That forced an overtime period before the seventh-ranked Flames finished off a 5-4 triumph in a suspenseful shootout to complete an improbable sweep.

"Absolutely, it's huge," Liberty Head Coach Kirk Handy said of the victory that extended the Flames' winning streak to nine games and raised their record to 16-1. "I think the atmosphere in the building was electric tonight. From a coaching perspective, we just want our guys to battle through it. Sometimes, the crowd can be an awesome boost and sometimes you have to keep the emotions in check because it's difficult with the crowd jumping out there. It's important that we just keep doing what we've been trying to do since the start of the year and that's play for each other and get the job done."

That's exactly what Liberty did down the stretch, when LeBlanc capitalized in crunch time, and in the shootout, when freshman forward Charles Williams and junior forward Ryley Egan netted the tying and game-winning goals with spectacular moves and finishes.

Williams, who was held scoreless in regulation after scoring three points in in Liberty's 6-1 win Friday night, deked Delaware freshman goalie Dylan Trojano to the right before lifting a backhanded shot into the upper netting, tying the shootout at 1-1 before Egan, the Flames' fifth shootout contestant, skated in with speed to the right and beat Trojano with a shot to the left side.

"That was a fantastic move by Williams and Egan had a real nice shot to win it for us," Handy said.

Delaware had taken an early lead in the shootout on a  spectacular shot by junior forward Wes Bonnell, who faked right and maneuvered the puck around Liberty senior goalie Blair Bennett before depositing it into the net with a backhanded shot. But Bennett denied the Blue Hens' next four shootout tries.

"Blair made some huge saves and some timely ones as well," Handy said. "In the shootout, they got the first one by him, but after that, he shut the door. Blair's played that way for four years and whether it's Blair or Matt (Pinel) in net, our team has confidence in both of them, and whether it's our fourth line out there or our first line and whether it's or top defensive pair or the other defensemen out there, we have confidence in those guys who are out on the ice."

Perhaps no player inspires Liberty's confidence like LeBlanc. Stationed near the right post just 27 seconds into the second period, he lifted Liberty to a 1-0 lead by flicking a cross-ice pass from sophomore defenseman Steven Bellew past Trojano.

Later, trailing 4-3 with 55 seconds remaining in regulation, LeBlanc received a backhanded pass from freshman forward Robert Ward around a defender in the left corner and sneaked a shot past Trojano inside the left post, sending the game into overtime in thrilling fashion.

Senior captain Andrew McCombe and sophomore forward Tyson Street sniped Liberty's second and third goals. McCombe's came off a pass from behind the net from freshman forward Brandon Mistal, giving the Flames a 2-1 lead with 54 seconds left in the second. Street gave Liberty a brief 3-2 lead with a shot from a tough angle in the right crease off an assist from Kyle Garcia.

But every time the Flames scored, the Blue Hens retaliated, tying the game three times before netting the go-ahead goal with 6:14 left in the third. Just 21 seconds after his five-minute penalty expired, Bonnell picked up a loose puck and split Bennett and defenseman Jackson Kuhn through the left crease before sliding a backhanded shot into the open net for a 4-3 edge.

The Flames outshot the Blue Hens 49-24 on the night, but had to keep battling back to win it.

"Delaware's a great opponent," Handy said. "They're a top team in the country. We just had guys up and down the lineup step up and make big plays. A lot of it, too, was the unsung heroes, the (Christian) Garlands and the (Ryan) Kerrs who killed a pile of penalties for us. We were short a defenseman and had five defensemen and our defense battled through it for not a 60-minute game but a 65-minute game. It's guys stepping up. There's a lot of great things you like to see, but at the end of the day, the guys are working hard for one another and as a coaching staff, we are just focused on the guys in the locker room and making them be able to play the best that they can every night and play for each other."

Liberty will conclude its 12-game homestand next Friday and Saturday nights against Stony Brook, another perennial power.