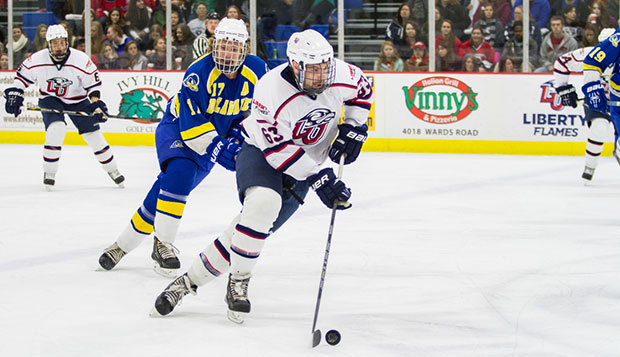 Liberty University's Division I men's hockey team, currently No. 7 in the ACHA DI rankings, demonstrated why it has netted the third-most goals in the league this season, Friday night at the LaHaye Ice Center.

The Flames (15-1) showcased a balanced attack against fourth-ranked Delaware, getting production from three of their four lines in a 6-1 triumph over the Blue Hens (11-3-1).

"It was encouraging to think about the guys that scored tonight," Liberty Head Coach Kirk Handy said. "(Lindsay) LeBlanc and (Charles) Williams each scored off the first line, (Andrew) McCombe scores twice on the second line, the third line doesn't get anything, but on the fourth line, (Kyle) Garcia and (Ryan) Kerr chip in. Again, we're getting contributions up and down the lineup."

Williams, a freshman forward who has been the Flames' leading scorer over the past three weekends, set up Liberty's first goal and finished its second on a power play late in the first period.

Moments after Flames senior goalie Blair Bennett made a sliding save and recovered in time to repel two more shots from close range, Williams sparked Liberty's transition attack. He worked the puck through the left circle and, as defenders closed in, sent a quick pass to Ryley Egan in the right crease. Egan's shot struck the right post and Blue Hens goalie Patrick Rochefort and landed in front of the goal line where LeBlanc swiftly slapped the rebound into the open net at the 12:13 mark.

Ten minutes later, after Alex Guerere was called for interference and sent to the penalty box, Williams took matters into his own hands to extend Liberty's lead to 2-0. Immediately after the Flames changed offensive lines, Williams took a short outlet pass from Bennett and skated up ice. Despite being surrounded by all four Blue Hens, he launched a left-handed wrist shot that beat Rochefort top shelf.

McCombe, a senior forward and team captain, netted Liberty's first two goals in the third period, the first on a five-on-three power play to stretch the lead to 3-0. He took a pass from Robert Ward at the top of the right circle and rifled a slapshot into the upper netting.

Delaware got that goal back on a five-on-three of its own when Christian Tasker beat Bennett with a slapshot off an assist from Dylan Trojano with just under 9:00 remaining.

"Blair had a solid night in net for us," Handy said, noting he made 20 saves. "Delaware's a tough opponent. It's 3-1 and they have opportunities to make it 3-2 and we kill off the penalties and break the game open again."

Liberty outshot Delaware 29-21 for the night and made the most of its chances in the four-goal third period. With less than five minutes left, McCombe took a short pass from Williams off the boards and uncorked a blistering shot from the top of the right circle for a 4-1 advantage, sliding across the ice on one knee in celebration.

Kerr and Garcia put the victory on ice with two goals in the final four minutes off assists from sophomore forward Tyson Street, with Garcia's rebound in the closing seven seconds capping the scoring.

Last year, Delaware won three of four matchups with the Flames, including both at the LaHaye Ice Center. On Saturday, Liberty will try to turn the tables and complete the sweep when the puck drops at 7 p.m.

"Delaware's always a strong opponent," Handy said. "We always know what they're going to bring. Our guys battled tonight and we need to continue to work harder (Saturday) night."