Team gears up for Saturday's first meet at Virginia Tech 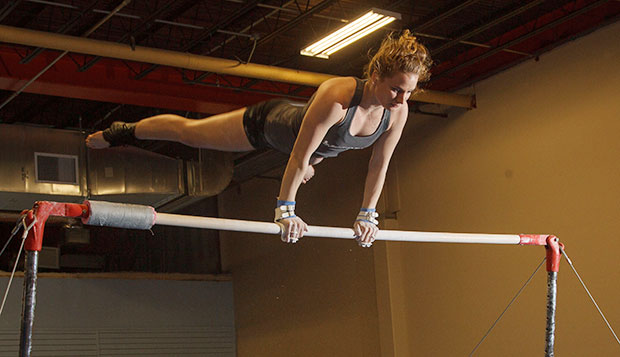 "Everybody seems to be getting along really well, with positive attitudes," she said during an early-season practice at the team's gym in The Plaza. "They're really good about encouraging each other, and they're working really hard so far, which is great."

A total of 20 gymnasts made the team, up from 15 on last year's squad. Liberty opens its season Saturday at the Hokie Classic hosted by Virginia Tech.

"We've got a lot of freshmen coming in that have good gymnastics experience, so I'm looking forward to it," Steele said. "We're going to have six girls that are going to do all four events and a couple of them are individual event specialists (so) I think we're going to be able to have the maximum of eight people competing in each event."

Liberty also has some promising new recruits, including Jessica Hogue, a freshman all-around gymnast who was the Level 8 YMCA national champion last year for her high school club in Seattle.

She said the team features a wide variety of ability.

"We have skills all across the board," Hogue said. "There are some who are just starting and others who have been big-time Level 10s, but everybody's really supportive and wanting everybody to get new skills."

The team's fitness level is high after spending much of the preseason running and weight training.

"We're actually started the year out with a lot of conditioning and strength training, kind of like you would in the preseason of any other sport," Steele said. "Then we moved to basic skill work they need for each of the events, and started putting together our routines to fulfill all of their requirements in each event."

The Flames' men graduated their only performer from last year, Steve Lucia, but picked up five new gymnasts, enough to compete as a complete team.

"The minimum number that you need for a male team is three, and for women's it is four," Steele said. "We've got five (men) so that's a step in the right direction."

One of the all-around competitors is Jonathan Baldwin, a first-year student in the Liberty Baptist Theological Seminary.

"I'm pumped," said Baldwin, who competed for one year as an undergraduate at Saginaw Valley State University. "I think I'm the oldest member on the team — I just turned 24 — so to be able to continue to do this as I get older is really exciting.

"I'm not at the Division I level, but I'm not a beginner, either," he added. "I'm somewhere in the middle. I've been doing a lot of floor, vault and some pommel horse, so I should be ready to go on those."

After coaching male and female gymnasts for three and a half years at a private club in Michigan, Baldwin has also volunteered to assist Steele in running practices.