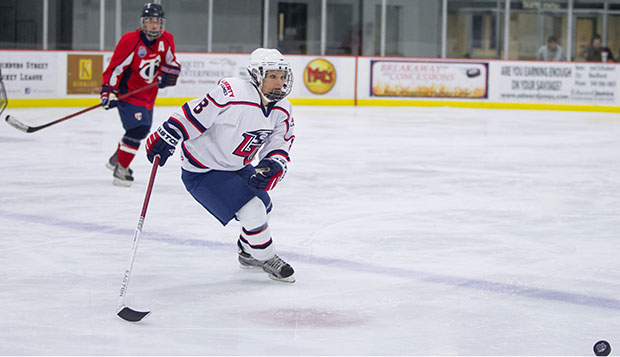 Liberty junior forward Jenny MacArthur looks up ice in a match earlier this season at the LaHaye Ice Center.

Sometimes in hockey, no matter how dominating a team may be on the stat sheet, the final score doesn't reflect  it.

Such was the case for Liberty University's ACHA Division I women's hockey team Sunday morning in its rematch with Northeastern University at Matthews Arena in downtown Boston.

"We outplayed them, we outshot them and we couldn't get in the back of the net," Liberty Head Coach Paul Bloomfield said as the team drove through a downtown tunnel under Boston Harbor, embarking on a 12-hour road trip back to Lynchburg. "The goals we got were just from hard work. We got two in but should have had four or five."

In fact, the more Liberty outshot Northeastern throughout the game, the worse things got for the Lady Flames.

The two teams finished the first period tied at 1-1 when Liberty held a narrow 11-9 edge in shots. The Lade Flames outshot the Huskies 20-7 in a scoreless second period and were outscored 2-1 in the third, when they held a commanding 18-6 shot advantage on its hosts.

"We pounded their goalie and couldn't get it in," said Bloomfield, who had a squad of 14 players after senior forward Laura Del Monte flew to Boston to rejoin the team on Saturday. "We had three full lines today which helped us. It's just we've got to figure out, when one girl goes to the net, we've got to have a second one go for the rebound to capitalize. We're getting to the net, it's just frustrating not to be able to finish."

Del Monte actually started the scoring less than three minutes after the opening faceoff, putting away a short feed from behind the net from Nikki McCombe, with fellow junior forward Jenny MacArthur recording the secondary assist.

"We outplayed them, but there were a couple times where we broke down and they capitalized," Bloomfield said. "A couple turnovers hurt us. They were working hard and were at the right place at the right times."

In the final minute and a half, Bloomfield pulled junior goalie Sam Rupp to set up a six-on-five advantage and junior forward Amanda Grainger scored the game's final goal off an assist from Sarah Stevenson with 12 seconds remaining in regulation.

Unlike in Friday night's game, when the Lady Flames were whistled for seven penalties, including two in the final two and a half minutes that allowed the Huskies to rally from a 3-1 deficit to forge a tie with two power-play goals, Liberty was only called for three penalties Sunday.

Northeastern, the 2012 ACHA DI national champion, defeated Rhode Island on Saturday night, 2-1, while Liberty had the day off.

"We should have had the advantage on them since they played last night, too," Bloomfield said. "They're not an exceptionally strong team, not as strong as Robert Morris (Illinois, which Liberty split two games with two weekends ago). We really needed both of these games this weekend. It was discouraging because we definitely outplayed them, but couldn't get it done."

The Lady Flames, who host Northeastern on Jan. 31 and Feb. 1, return to action at the LaHaye Ice Center Nov. 14-15 against the same Reston Raiders U-19 team it swept last weekend. Then, they'll embark on another 12-hour bus ride to New England for a four-game road trip to meet Rhode Island Nov. 22-23 and the University of Massachusetts Nov. 25-26.

Bloomfield expects both teams will be in the ACHA DI top 10 when the first national ranking is released Nov. 23.