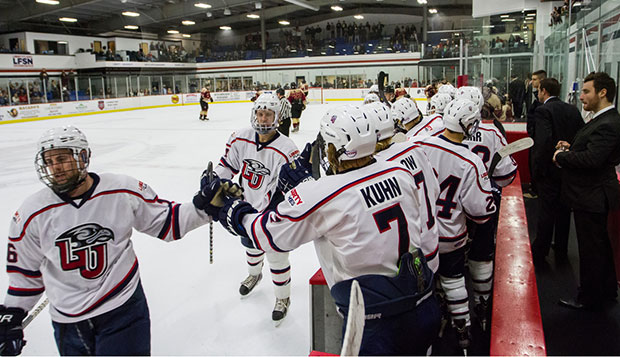 Liberty junior forward Lindsay LeBlanc (left) leads a line in celebration of a goal with Flames' teammates on the bench during last Friday's 4-2 victory over Rochester (Mich.) College.

By overcoming early 1-0 deficits to sweep unranked Rochester College last weekend, Liberty University's ACHA Division I men's hockey team (12-1) extended its winning streak to five games and moved up another spot to No. 6 in this week's ACHA DI national rankings.

The Flames (12-1) are starting the second half of a 12-game homestand at the LaHaye Ice Center, where they are 8-1 so far this season after opening the 2012-13 campaign by going 8-0 on their home ice.

The Eagles (6-7) have gotten off to a rollercoaster ride of a start, winning four of their first five games before losing their next five, falling twice to Adrian and twice Florida Gulf Coast. After being blown out by Oakland, 10-2, the Eagles rebounded to edge the Grizzlies by one goal at home in Ypsilanti and away in Rochester before being shut out by John Carroll on Sunday.

Liberty scouting report: Balance has been the Flames' greatest strength this season, and they got production from all four of their offensive lines in Saturday's 7-1 triumph over Rochester.

Ward and Williams rank second and seventh, respectively, in the ACHA in scoring among rookies. Mistal (two goals) and Williams (two assists) sparked the Flames in Friday's first game against Rochester before Williams netted the tying and winning goals in Saturday's second game.

Senior goalie Blair Bennett (1.57 goals-against average, 0.93 save percentage) improved to 4-0 in the first game before freshman Matt Pinel (2.65 GAA, 0.90 SP) raised his record to 8-1, ranking him first in the ACHA among rookies in wins.

Eastern Michigan scouting report: Though they've struggled in recent years, the Eagles have a strong hockey history, reaching the ACHA DI national championship game in 1994 and 2000 when they lost to North Dakota State and Penn State, respectively.

Andrew Duff (4-5) has played the majority of the minutes in goal, recording a 4.24 goals-against average and 0.87 save percentage.

All-time Series: This is the first-ever meeting between the Flames and the Eagles.

Coaches: Kirk Handy, in his 14th season as Flames head coach, has an overall record of 291-123-13. Kevin Gee is in his fourth season at Eastern Michigan after being named the Michigan Collegiate Hockey Conference coach of the year in 2008-09, his last season at Lawrence Technological University.