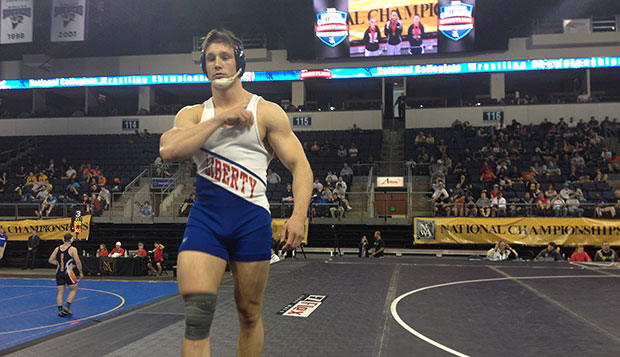 Flames senior 197-pound wrestler Aaron Thompson, an NCWA Nationals runner-up last season and champion in 2012, is recovering from a knee injury, as is 184-pound senior Royal Brettrager, who placed third in the NCWA Tournament last year.

Last year, the lower weight classes — from 125 to 149 pounds — were the weakest links in Liberty University's wrestling team's lineup. This season, head coach Jesse Castro has loaded up with lightweights and believes they could turn dual meets and even tournaments in the Flames' favor.

"I'm really pleased with my lower weights, and excited to see what we can do down there," Castro said, noting the Flames are looking at three potential starters at 125 pounds and four at 133. "They'll certainly be more competitive."

Besides 125-pound recruits Tim Nordan from Frederick, Md., and Jacob Cunningham from Christiansburg, Va., and 133-pound freshman Ike Podell, a Liberty Christian Academy (LCA, Lynchburg, Va.) graduate, Castro has added a couple surprises, including Jake Paull, a freshman from Massachusetts who could compete at 125 or 133.

"Right off the bat, I really like the way Tim Nordan is working at 125," Castro said. "I think he'll do well for us after he pays his dues, so to speak. Jake Paull has been in the military for a couple years and he's a little buzzsaw. He's 138 pounds, short, compact, very strong, and has a good motor to him."

Collin Lewis, a former NCAA Division I wrestler at Liberty, is now a first-year graduate student with two years of eligibility who could see action at 141 or 149.

"At the Division I level, he was a .500 wrestler," Castro said of Lewis, who coaches Heritage High School's wrestling team in Lynchburg. "For this level, he should be better than that."

The Flames are returning runners-up in the National Collegiate Wrestling Association (NCWA) National Duals after winning that title in 2012. Now called the Collegiate Cup Duals, that event is set for Jan. 24-25 in Dalton, Ga. Bonus points based on teams' showings at the Collegiate Cup will be awarded at the start of the March 13-15 NCWA National Championships in Allen, Texas. Liberty repeated its third-place showing at that individual tournament last year.

However, the Flames graduated their only national champion, 235-pounder Andrew Wilson, and they start the season without four other all-Americans, including Marcus Miller, an LCA graduate who was a national runner-up at 157, and third-place finisher Bobby Clymer, a Liberty Online student who will sit out the season after having major offseason shoulder surgery. Senior 197-pound finalist Aaron Thompson and 184-pound runner-up Royal Brettrager are recovering from knee injuries and won't be available until December or January.

"Losing three national finalists is going to hurt any program," Castro said, noting it shouldn't prevent the Flames from reaching their postseason goals. "It's always going to be a challenge (competing at nationals), but we actually have a little more well rounded lineup this year."

In addition to Thompson and Brettrager, holdovers from the NCAA Division I program, Liberty's most experienced wrestlers to start the season are Peter Tatanish at 141 or 149, Chase Boontjer at 157, and Keyshaun Ward at 174.

"That's kind of the heart of our team," Castro said.

Freshman Josh Ferenczy, a high school state qualifier in New York last year, is challenging for Clymer's starting spot at 165. In the upperweights, the Flames feature freshman Matt Reynolds from Chesapeake, Va., at 184, sophomore Josh Travers, a returning national qualifier at 235, and Marquis Porterfield, a heavyweight from Christiansburg.

Ferenczy is one of a dozen Liberty wrestlers who will travel to this Saturday's Virginia Beach Nationals, where Castro expects to see representatives from 15 schools, including nearby Old Dominion University and the Apprentice School, the University of Virginia, Virginia Tech, Duke University, and Longwood University as well as several unattached individuals.

On Nov. 9, the Flames will flock to Philadelphia with a more experienced group of 19 wrestlers for the Fall Brawl, a much tougher tournament hosted by Ursinus College. That event will draw Delaware Valley (Pa.), Franklin & Marshall, West Chester State, Sacred Heart University, and the College of New Jersey, a top-10 NCAA Division III team, among others.

"We'll see a lot of competition in the fall, which is basically prepping us for the winter season," Castro said. "Our goal is to get some experience and develop some of our new kids, to see what we're building on for the future. We like to peak toward the end of the season, building up to the crescendo of the Virginia Duals and the National (Collegiate Cup) Duals. Those are the key events we focus on."

Before then, Liberty will return to Ft. Lauderdale, Fla., for the Dec. 27-28 Citrus Classic Invitational, which attracts numerous NCAA Division II and III programs.