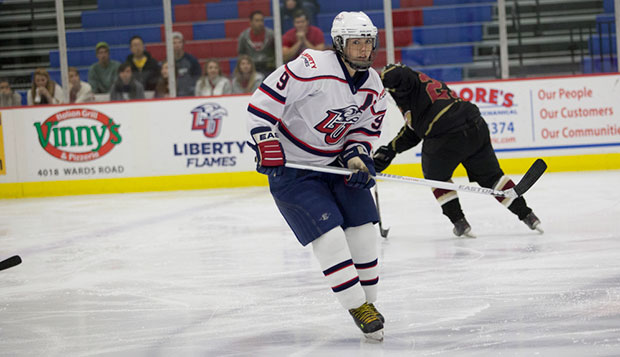 Senior forward Nikki McCombe was one of seven Lady Flames to score in Sunday's 7-1 victory over the Reston Raiders.

Liberty University's ACHA Division I women's hockey team prepared for next weekend's road trip to Northeastern by traveling to Northern Virginia for games against the Reston Raiders, Saturday and Sunday at SkateQuest.

The Lady Flames dominated the 19-and-under squad in both contests, winning the first 10-0 Saturday afternoon and the rematch 7-1 Sunday morning.

"They're a young team," Liberty assistant coach Justin Forth said. "We were a lot faster and stronger. We were working on a different attack and neutral zone coverage. We just wanted to try the new stuff to get ready for Northeastern, to see how well it would work."

Junior defenseman Autumn Kucharczyk added a goal and three assists as the Lady Flames opened an 8-0 advantage after the second period.

"It was a good bonding experience for the team," Forth said of the road trip. "The girls had fun with it and we tried different things as a team systematically. We moved the puck around more and gained some confidence offensively."

"They couldn't get much going offensively," Forth said. "A couple times, we may have been standing around too much defensively. We were an older, more experienced team, and we were just better."

"The girls were passing a little bit better (Saturday), with better puck support," Forth said. "Today's game, it seemed like everybody wanted to score and there was a little bit too much solo effort. We've got to get on them a little more about moving the puck quicker between teammates, and working together as a team."

He said facing Northeastern in its home rink twice, next Friday at 10 p.m. and Sunday at 9 a.m., will be a huge step up from playing the Raiders.

"They were ranked in the top five coming into last year's (ACHA DI National) Tournament and were the national champion the year before, so we'll definitely have our work cut out for us," Forth said. "We're going to have to stay out of the penalty box and both of our special teams have to be firing — our penalty kill has to kill the penalties off and we need to take advantage of our power play opportunities and score when we get a chance."

Another area Liberty could definitely improve in is its puck possession and transition game, especially if it expects to make another run to the ACHA DI championship game.

"We need to tighten up the neutral zone, and take care of our turnovers between the blue lines," Forth said. "That's where the games are won or lost, in the neutral zone. We've got a lot of work to do to make it back to nationals. We hope to have everything firing by March."