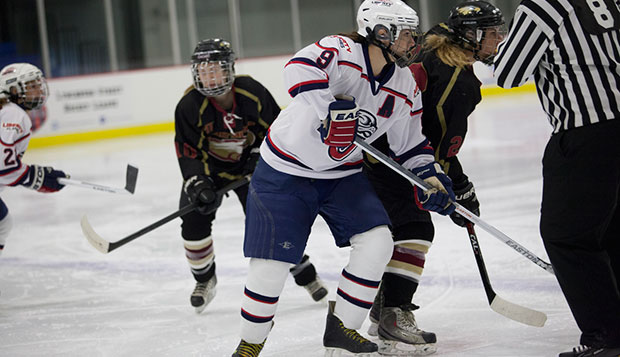 Lady Flames forward Nikki McCombe (9) battles with an Eagles player during their extremely competitive series over the weekend at the LaHaye Ice center.

Two defensive breakdowns by Liberty University's ACHA Division I women's hockey team's defense led to back-to-back goals by Robert Morris Illinois in a span of six seconds early in the third period of Sunday's rematch at the LaHaye Ice Center.

Liberty's brief lapse under persistent pressure allowed the Eagles (5-1) to erase a 2-1 deficit and come away with a 3-2 victory and a series split against the Lady Flames (2-3-2), who had won the past two meetings in overtime, including in the semifinals of last year's ACHA DI National Tournament.

"We didn't play well at all," Bloomfield said. "They were playing with a lot more energy than we were. I don't think the girls were lazy, they just weren't putting the extra effort in that we needed and when we made mistakes, these good teams make you pay. We've got to try to regroup and refocus."

After holding a 13-11 shot advantage in the first period, when it opened a 2-0 lead on goals by freshman forward Courtney Gilmour — who tipped in a shot by sophomore defenseman Brittany Hymer — and junior defenseman Autumn Kucharczyk, Liberty was outshot by Robert Morris 18-8 in the second period and 18-10 in the third.

"We kind of sat back after we got the first two goals and just let them in too much," said Kucharczyk, who blasted in the second goal on a slap shot from the perimeter off freshman defenseman Marissa Graham's second assist of the game. "They really put pressure on us. They lost to us yesterday, so they really wanted to win today. They just took it to us, really. They won the battles against the boards."

Liberty goalie Samantha Rupp made 44 saves, many of close-ranged shots in the crease, but eventually the Eagles' pressure caused the Lady Flames' defense to collapse.

"Sam played a good game, but she didn't have a whole lot of help in front of her at times," Bloomfield said. "That last goal they got, that was just a total breakdown on our defense. They just closed in when they got in behind our defense and I saw the thing breaking down."

Rupp blocked an initial shot off a faceoff in the Lady Flames' defensive zone, but it bounced off her pad into the open left crease where Madi Biluk put away the game-winner, nearly into an empty net.

Jessica Merritt scored Robert Morris' first two goals, the first on a power play off an assist from Marianne McLaughlin with just 4:24 left in the second period. Just over a minute into the third, Biluk intercepted Hymer's cross-ice pass deep in Liberty's defensive zone before Merritt netted the equalizer, threading a shot through traffic from in the right circle.

"When you play good teams, you've got to watch the turnovers," Bloomfield said. "Turnovers hurt us. The girls got down and those are hard mentally. You just have to try to eliminate those mistakes because those mistakes not only are the mistake of the moment, but they carry ramifications. Psychologically, it's hard to overcome."

Liberty did generate a few quality scoring chances in the final 18:45, with Sarah Stevenson rejected on her shot from the right side in a one-on-one with Eagles goalie Amy Murray and Kucharczyk's transition shot from the top of the left circle glancing off the top right corner of the cage.

But Robert Morris dictated the action with its grinding play on the boards and puck movement around the ice.