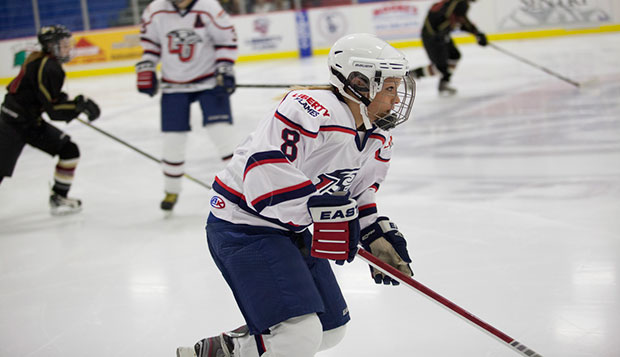 The rematch of last year's ACHA Division I National Tournament semifinals, won by Liberty on a second-overtime slapshot by Jickling, ended in similar fashion, only this time with 1 minute, 32 seconds left in the first extra period.

Seconds after Lady Flames junior goalie Chantal Lischynski covered up a Robert Morris shot through the right crease, Jickling won the ensuing faceoff on the defensive end and started a fast break the other way. She bounced a pass to herself off the left board and skated along Liberty's bench before faking Eagles goalie Anna Salvaggio to the left and lifting a sharp-angled wrist shot into the upper right netting for the game-winner.

"Her leadership definitely came through there," Lischynski said. "She knew what she needed to do and she just right off the faceoff went for it and finished the game."

Coming off a road trip to Michigan two weeks ago when they were held scoreless in a 1-0 loss to Adrian and tie with Michigan State, the Lady Flames (2-2-2) regrouped, returned a couple players from injury, and evened their record with a critical win over a highly regarded opponent.

"I think the girls played a great game and we obviously got the result we needed and wanted," Liberty head coach Paul Bloomfield said. "We've been very fortunate we've beaten them the last several times we've been together, but it's never been a handout. We've had to work for everything we've got."

The Lady Flames battled back from 1-0 and 2-1 deficits with first- and second-period goals by defensemen, the first unassisted by Jenny MacArthur, who's normally a forward, just 1:35 before the first intermission.

"We're not used to having this many defensemen," Lischynski said. "They were all healthy this game, so our coach told them to rush the puck if they could and they did and they scored."

"We did load the defense a little heavier than we normally do," Bloomfield added. "We usually run four and we ran six today mainly because we knew this team is so physical. I told the girls right up front Robert Morris is a good team and it's going to be gritty and grinding work."

Four minutes after the Eagles (4-1) went up 2-1 on Chelsea Kasprick's wrist shot from in the left circle, Liberty junior defenseman Madison Fisher took a pass from Sarah Stevenson, who skated behind the net into the left crease where she knotted the score with a tough-angled shot with 12:35 left in the second period.

That period ended with Lady Flames senior defenseman Courtney Fischer being checked hard head-first into the boards directly in front of Liberty's bench.

"We had a lot of motivation because Courtney, our captain, got injured in the second period, so we used that as motivation for overtime to play for her," Lischynski said.

The teams traded opportunities throughout the rest of regulation, with Robert Morris getting several quality chances, especially on the power play after Stevenson was called for back-to-back penalties late in the third period.

But Lischynski, who returned from an ACL tear suffered after leading the Lady Flames to a deep run in the 2012 national tournament, was up to the task, making many key pad and glove saves down the stretch.

"It was really important that I got my head in the game in the third period because it was tied and our team has a history this year of not scoring much," Lischynski said. "I knew it was up to me to shut them down to give our team an opportunity to score, especially going into the overtime with a penalty kill."

After a slow start, in part due to team attrition and injuries, Bloomfield is pleased with the progress the Lady Flames have made in the early season.

"We're still building this year and I'm pleasantly surprised and happy the girls are coming where they are," Bloomfield said. "You can't look back, you've got to look forward."

Liberty and Robert Morris expect another fiercely competitive rematch when they face off Sunday at 1 p.m. in the LaHaye Ice Center.