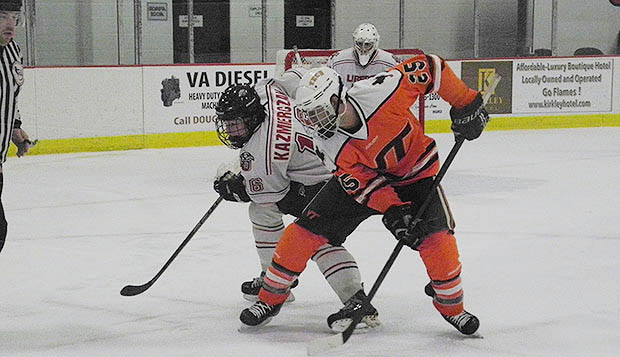 Rebounding from its first loss of the season, Friday night against Virginia Tech in Roanoke, Liberty University's ACHA Division II men's hockey team used a flurry of goals from five different players to salvage a crucial split with the Hokies by the same 5-3 score, Saturday at the LaHaye Ice Center.

"It was good to see the boys bounce back and show a little resilience and character," Liberty head coach Chris Lowes said. "It was a quick turnaround and a good regroup. We had all the pressure on us tonight. We were motivated. These were our first two (Mid-Atlantic Collegiate Hockey Association) league games and we didn't want to fall to 0-2."

"It was huge," senior forward Bobby Cervone added. "It hurt losing yesterday and we hated that feeling. They're a great opponent for us (and) all the boys knew what we had to do coming in today and we executed. All the lines were running well tonight."

Senior forward Brad Docksteader got the Flames (11-1) on the scoreboard first, putting away a short assist in front of the cage on a power play midway through the first period.

Cervone later capped the Flames' scoring shorthanded for a 5-2 advantage with 55 seconds left in the game by swatting the puck out of the air for a steal at mid-ice before finishing a one-on-one breakaway, beating Virginia Tech goalie Walker Detweiler to the five-hole.

Cervone's late goal was the third to go between the pads of Detweiler. Sophomore forward Josh King followed a shot by Eric Burke, sneaking it between the wickets to give Liberty a 2-1 lead with 6:30 left in the second period before Johnny Cotton threaded a shot through traffic between the circles, and Detweiler's legs, off an assist from Paul Ingles.

"King and Cotton both went five-hole so I knew, that was the first place I was looking," Cervone said.

"We're always harping on our guys about shooting low," Lowes added. "It's a weakness on a lot of goalies, when you catch them in transition."

After Alex Smith drew Virginia Tech within 3-2 by shuffling the rebound of his own blocked shot under the pads of Liberty sophomore goalie Cary Byron, Burke finished a perfectly placed crossing pass from Jordan Barstead into the right of the goal mouth, extending Liberty's lead to 4-2.

"We're just happy we got the match-ups we wanted tonight," Lowes said. "(Peter) Kazmierczak's line really shut down their top line that got three goals against us last night."

Byron made 30 saves in goal in a rare start in place of Nick Devine.

"Cary definitely played a great game in net," Lowes said. "It was his first real test against a top team and I'm real happy with the way he showed up and responded. The first period, we were outplayed, outshot, and we killed three penalties. He was a big part of that and he made a couple real big saves in the second and the third."

Lowes predicted both teams would be ranked in the top five in the Southeast Region when the first ACHA DII polls are released next week and Cervone said they would see each other again, "most likely in the playoffs."

Last year, the Flames defeated the Hokies in their regular-season finale before losing to them the very next time they took the ice, in the MACHA Tournament opener.

Liberty gears up for a rare road trip to face undefeated Florida Gulf Coast next Friday and Saturday nights. The Flames lost the teams' only previous meeting in 2011, the year before the Eagles won the DII national championship.