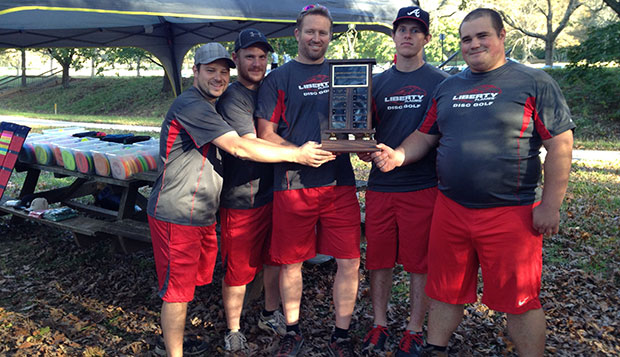 Persistence paid off for Liberty University's disc golf team in this past weekend's Northeastern Collegiate Disc Golf Championships, where they overcame some top-flight competition and fought off pesky swarms of gnats to return with the first-place trophy.

"Both days were beautiful, but the gnats were the worst I've ever seen," Liberty head coach Steve Bowman said. "You literally had a cloud around you. You'd try not to wave them off when other guys are putting, but they affected everybody. They were annoying."

Undaunted, the Flames' foursome of seniors Devin Swartz and Jared Lebo as well as junior Lance Brown and first-year assistant coach and player Joses Merat approached the course at French Creek State Park in Birdsboro, Pa., with patience and resolve, calculating their shots and picking off opponents one by one.

The Flames worked their way up from third place out of eight teams following Saturday's first round of doubles to move ahead of Clemson by one shot and draw within one shot of Worcester (Mass.) State going into Sunday's final nine-hole round of singles play.

That's when they made their move, pulling ahead of Clemson by seven shots and Worcester State by 13 to capture the championship with an overall score of 498.

"Our guys had a couple good first holes, but Clemson and Worcester jumped out to an early lead," Bowman said of the final round. "Then, midway through the course, we started pushing forward. The guys had an amazing turnaround and made an incredible run. It was awesome. They starting hitting some good lines and making some good shots while other teams took some bad lines and had some unfortunate shots."

"We just played solid," Bowman said. "We put the pressure on them and Worcester fell apart. Our guys just stepped up and made some really good throws and handled the pressure well."

The Flames were led by Brown, the weekend's individual medalist who shot a tournament low score of 86. Merat tied for second overall at 87 and Swartz carded a 90 for fifth place.

For the last nine holes, the course was extended, with the baskets moved to the farthest positions, nearly doubling the length of the links. It was already a wooded course, like the front nine at Liberty.

"Lance (Brown) thrives on that wooded course, so for him to hit those nice wooded lines and shoot that score in the last round was huge," Bowman said.

He emphasizes course management and not trying to make up too much ground on the opposition too quickly by taking unnecessary risks.

"The key is playing the shot that's in front of you and making the best of each shot," Bowman said.

The Flames' consistency allowed them to close the deficit and extend their lead when their competition made mistakes.

"A couple of the key holes just separated us," Bowman said. "We just kind of chipped away at them and there was one signature hole that put a gap on them."

On the same hole Merat fired a birdie by shooting a 3, two other players carded scores of three-over-par 7.

Swartz trailed his competitors going into the last three holes of singles play.

"He ended up tying or picking up one shot on Clemson on every hole," Bowman said. "Walking through the woods, he just kept saying, ‘I have to keep up with this guy.'"

By finishing in the top two in the team standings, Liberty will receive a first-round bye at the National Collegiate Disc Golf Championships, set for April 16-19, should it qualify for a third consecutive trip to North Augusta, S.C. Last year, the Flames advanced to nationals by winning the Flamethrower Invitational at Liberty.

"The first day at nationals, there's going to be a cut to the first flight tournament and now the pressure's kind of off," Bowman said. "This allows us to have that safety net."

Winning the Northeastern Championships should elevate the Flames into the top 25 in rankings done by National Collegiate Disc Golf.

"It's great exposure for Liberty," Bowman said. "Going up to a bigger atmosphere like Northeastern was big for us. It gets us into the rating system to where we can gauge how we're rated against some of the top schools in the nation."

The tournaments the Flames plan to compete in over the next six months, including the Central Virginia Brawl Series starting in December, will further prepare them for nationals.

"The guys are confident about the (Hippodrome Disc Golf Complex) courses because they've been there for two years," Bowman said of the nationals site. "The courses we're going to play on this season are going to reflect that style of play, and we'll be focusing on doubles play, making some distance on some teams, and being more aggressive. We still have six months to go to train and prep for nationals. We're going to be making sure that mentally, we're ready; physically, we're ready."