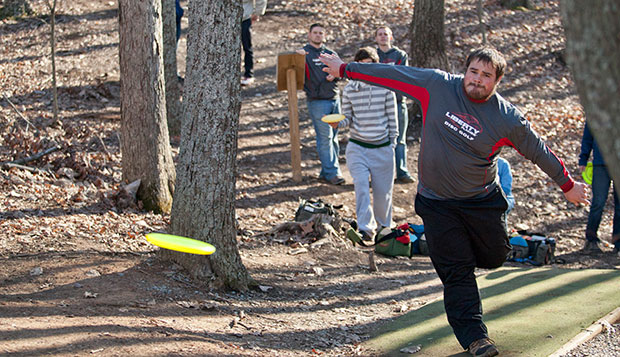 Flames senior Devin Swartz, who will compete this weekend in Pennsylvania, tees off during last year's Flamethrower Collegiate Classic, which Liberty won to earn a trip to the National Collegiate Championships.

An influx of new recruits, including four female players, has improved the competitive atmosphere on Liberty University's disc golf team this fall.

"We've got some great new talent this year, which has put some pressure on the guys that were here last year," Flames head coach Steve Bowman said. "It has given us a good foundation to build on for the next couple years with some of the new guys coming in."

Returning seniors Devin Swartz and Jared Lebo as well as junior Lance Brown will be joined by first-year assistant coach and player Joses Merat to form the Flames' four-man lineup.

"All these guys that will be competing have at least two years of experience," Bowman said. "I think we're ready this year. We've been playing all summer."

There will be two doubles rounds and one singles round for the event, which starts Friday and concludes Sunday. The top three scorers will count toward the team total and the top two teams will receive automatic byes through the first round of the National Collegiate Championships in early April.

"On the first day of nationals, if we get in, you have to be (one of) the top teams or you go home," Bowman said, noting it is a five-hour trip to North Augusta, S.C., site of the national event. "If we could sneak in and get that bye, that would be great."

Teams from the University of Massachusetts and Pittsburgh may be favorites at this weekend's tournament, but Bowman said the Flames should feel right at home playing at French Creek State Park.

"The course is really wooded, which plays into our strength," he said. "It'll be kind of like the front nine or 10 at Liberty, which is where we've been practicing. We played out at a tournament in Appomattox, Va., which is all wooded, so we've got a lot of good experience" avoiding trees in the fairways.

Liberty will again have the opportunity to qualify for nationals by defending its title at the Flamethrower Collegiate Classic, March 7 and 8 on Liberty Mountain.

This year, Liberty will have the opportunity to send a female team to nationals with the addition of Hannah Croke, Shelby Keith, Melissa Truman, and assistant coach and player Mary Merat. That potentially would improve their team score, based on the combined performances of both the men's and women's squads.