Liberty to train under British Olympic coach this weekend 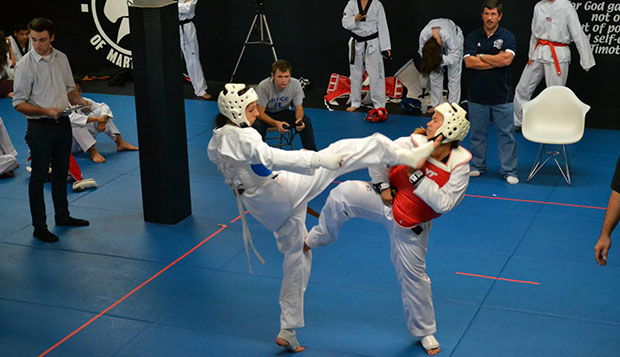 As head coach Jesse Wilson (right) looks on, Liberty freshman Michelle Rowell lands a kick to the head of Virginia Tech's Kat O'Malley during a competition Sept. 15 at the Renaissance Academy of Martial Arts in downtown Lynchburg.

Members of Liberty University's tae kwon do team will be traveling to Stafford, Va., this Friday, Saturday, and Sunday for a special training session with British Olympic tae kwon do head coach Joseph Salim, who led the 2012 Summer Olympic Games host country to a silver medal.

Salim is a three-time Olympian and four-time European World Cup champion. He is hosting this weekend's seminar with the help of 1988 United States Olympic tae kwon do gold medalist Arlene Limas, at her Power Kix Martial Arts studio. Limas is a sponsor of Liberty's team who led a training seminar at the Renaissance Academy of Martial Arts Sept. 15 in downtown Lynchburg.

"As a coach, (Salim) is ground-breaking and innovative," Liberty head coach Jesse Wilson said. "As an athlete, he has a record that would rival most. Mr. Salim has won several World Championships, three European Championships, represented Hungary at the 2000 Olympic Games in Sydney, and coached Denmark to four World Championship gold medals."

Wilson said Salim's experience in and knowledge of the sport will complement Limas' demonstration last month and enhance the development of his rapidlly growing team.

"I am fully committed to making Liberty's tae kwon do team the best on the collegiate circuit," he said. "It is training opportunities like these that will take us to the top that much faster."