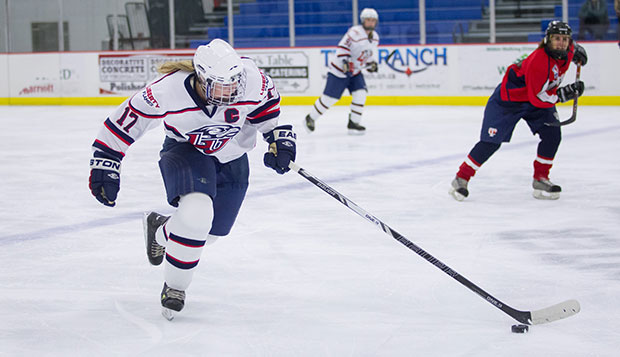 Liberty senior defender Courtney Fischer skates up ice with the puck in last month's series against the Raleigh (N.C.) U18 team. She helped the Lady Flames shut down Michigan State in Friday night's scoreless tie.

"Chantal was absolutely outstanding tonight," Liberty head coach Paul Bloomfield said of Lischynski, who tore the ACL in her knee a week after the 2012 ACHA DI national tournament and sat out most of last season. "When hurt your knee bad like that, (the recovery) becomes mental as well as physical. But she did a great job last night and she really stood on her head tonight. She was amazing."

Lischynski made 18 saves against Adrian, but Liberty lost on a penalty shot with 5 minutes, 39 seconds remaining in regulation on a call that Bloomfield questioned.

"There was a little bit of a scramble and Chantal got caught out of the net and she threw her stick to try to stop a shot and they were awarded a penalty shot," Bloomfield said, noting if the puck had hit the stick, it would have been an automatic goal. "A girl ran Chantal and ended up with a penalty. If the girl hadn't hit Chantal, she wouldn't have been out of position," where she had to throw her stick to try to make a save.

However, the Lady Flames (1-2-2) suffered their first ACHA loss of the season, after tying and losing exhibition games against a Raleigh (N.C.) 18-under team.

At Michigan State, the rink's Zamboni broke down, leaving spots of standing water on the ice.

"The ice was terrible," Bloomfield said. "It was really slow and when it's slow it's hard to skate (but) the girls battled really well."

"We've got some sore girls coming back," Bloomfield said before the team boarded a bus after midnight that would take them back to Lynchburg by around noon on Saturday. "It'll probably be Christmas before (Burrell) is able to rock and roll."

"They're just banged up," Bloomfield said.

Liberty played with only three defensemen, but still managed to shut out the Spartans, who had plenty of reinforcements.

"Michigan State had a full squad (and) they got through (the defense) a few times, but (Lischynski) did a good job," Bloomfield said. "The girls played really strong in the third period and the overtime, stronger than the first two periods. Michigan State was the stronger team of the two (compared with Adrian). We ended up drawing three penalties, but battled out of them each time. I told the girls after the game tonight, we're going to have to battle all year."

Liberty has next weekend off before hosting Robert Morris, which it edged in double overtime in last year's ACHA DI national semifinals, Oct. 19 and 20 at the LaHaye Ice Center.