Flames host MACRC event this weekend at the Sports Racket 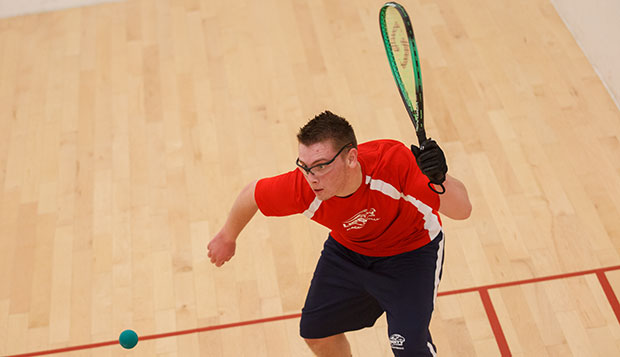 Senior left-hander Joel Denny, shown playing in last spring's MACRC tournament at The Sports Racket, is Liberty's top returning player and the only one competing at Level 1.

Starting Friday at 5 p.m. and running through the weekend, Liberty University will host the first Mid-Atlantic Collegiate Racquetball Conference tournament of the season, a USA Racquetball-sanctioned event at The Sports Racket in Lynchburg.

"The more games they win, more rounds they play and more points they earn," Flames head coach Danny Rodriguez said, noting there are brackets for two to three levels of men's and women's singles and doubles. "Every level starts in a gold division, where you get the most points."

Using the Olympic format, if players win they stay in the gold bracket and if they lose, they will drop down to the blue, red, and finally white divisions.

"When you lose in white, you're out," said Rodriguez, who will be competing with former player Shawn Furman, now a professional, in the A division of men's open doubles. "It's a collegiate format and all the tournaments are played the same way. The critical thing is … the more players you show up with, the more points you can get."

A complete list of first-round matches has been updated online.

However, Liberty's lineup was greatly reduced by graduation this past spring and the Flames are in full rebuilding mode, with eight men and four women — three who are completely new to the sport — currently on the roster.

"We had to go through a new recruiting phase this year because 80 percent of our players graduated," Rodriquez said. "We have four players left from last year. We're still in the recruiting process, trying to find more players."

On the men's side, Joel Denny is Liberty's only Level 1 team member, ranking him as an open elite player, while Ryan Evans and newcomer David Schreck are at Level 2, making them A/B players.

"David Schreck is new to the team, but he's really improved," Rodriguez said.

The Lady Flames, who had a dramatic increase in participation last season compared with the year before, will only have one player — Abby Lindsey, who has moved up from Level 3 to Level 2 — available for this weekend's tournament.

"(Denny, Evans, and Lindsey) were strong players last year and they've really helped in trying to get the rest of the team ready for this year," Rodriguez said. "I'm looking for (Lindsey) to lead the female team and to see how she improves this year."

Rodriguez is looking for new team members that have the desire to play the sport and the willingness to make changes to their games.

"We try to correct the flaws," he said of his staff that includes Furman and Charles Billingsley, also a worship leader at the nearby Thomas Road Baptist Church. "For competition racquetball, there is a lot of strategy involved and a lot of different shots you can use. We try to teach them when to make certain shots."

With players confined to a 40-by-20 playing area, positioning is critical, especially when the ball is traveling at speeds of up to 120 mph.

"Some people play too far forward and (their opponents will) blow it past them, or too far back and they'll hit it softly," for drop shots that can be nearly impossible to pick up, Rodriguez said. "There are times you need power and times you need the touch game."