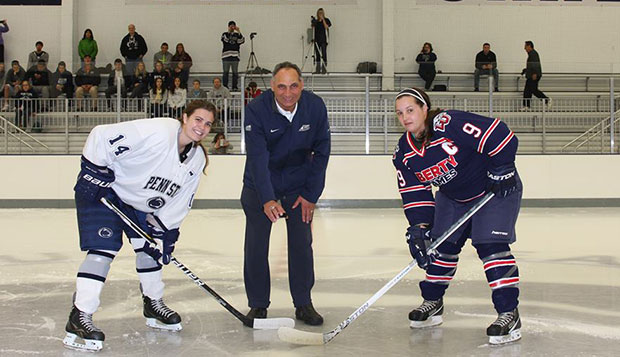 "We played in the community rink," Lady Flames head coach Sara Niemi said. "The NCAA one will be ready later this month."

The Lady Flames gave up nearly 150 shots in 6-0 and 7-0 losses on Friday and Saturday nights, respectively.

"We were shut out, but there were some positive things that came from this weekend," Niemi said. "Some of our new players really stepped up and helped us contain and control the national runners-up from last season."

Senior goalie Leanne Niemi, younger sister of the coach, was peppered with 148 shots in the two games and had a save percentage of 0.92, but still allowed 13 goals (6.50 GAA).

"She was an important player this weekend, but we had several girls also step their play up and challenged themselves to keep up with a well-rounded, fast, skilled team," Sara Niemi said. "On our defensive end, Rena Leone, Kaitlyn Scales, and Nicole Stevens all contributed, helping Leanne out by moving bodies around the net and clearing rebounds."

"Our offense played more defensively this game as they were a lot stronger than our players," Sara Niemi said. "But Jenna Holman, Sonja Nielsen, Kaitlyn Nelson, and Alena Steiger all blocked shots from the point and continued to pressure their offensive systems in our end. Overall, we did very well for our first game against the toughest team in our division."

The Lady Flames return to the ice to host Slippery Rock on Oct. 12 and 13 in the LaHaye Ice Center.

"We are looking forward to playing at home," Niemi said. "Not traveling and having two more weeks of practice will help us work on more fundamentals, systems, and our offensive play."