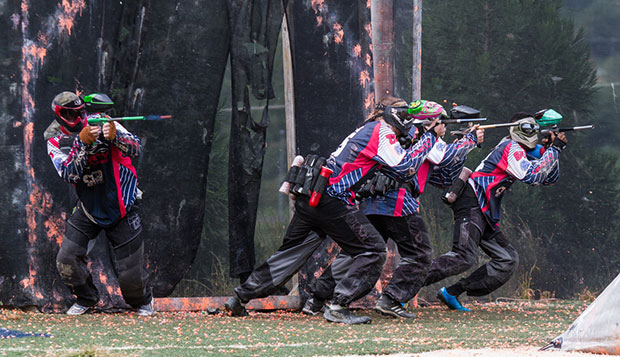 Junior captain Aaron Thompson (right), flanked by assistant captain Noah Burns and other members of the gold team, leads a charge to inflatable obstacles during a match at Saturday's tournament at the Liberty Paintball Fields.

Liberty University's paintball team walked away from Saturday's Liberty Open with first- and second-place showings and the overall championship for the season-opening tournament, waged on the Liberty Paintball Fields on East Campus.

The Flames are currently ranked No. 1 in the National Collegiate Paintball Association and plan to continue their successful run, targeting a return trip to the April 19-21 national championships in Lakeland, Fla.

"I always have high hopes for our team," Liberty senior assistant captain and gold team member Noah Burns said, comparing this season's squad favorably to last year's. "I think we have a lot more potential.  We also have a lot more depth."

With a roster of 26 players, the Flames suited up five different teams to compete against N.C. State, East Carolina, Radford, James Madison, Lynchburg College, Clemson, and VMI. The five Liberty teams — gold, red, blue, white, and black — are chosen based on skill level and practice performance. Each squad had the opportunity to participate in Saturday's tournament.

"Having five Liberty teams puts us above (the other teams)," head coach Todd Hoglund said of the Flames' advantage in numbers. "It was exciting. It was the first time that we've had two Liberty teams in the finals."

The gold team, which had knocked out the Flames' second-tier red team in the quarterfinals, was matched up against Liberty's blue squad in the finals. The 10 teammates battled for two of the tournament's longest games.

Senior Garrett Bornarth and sophomore David Dickerson of the blue team seemed trapped as the clock was running down in the final game, with Burns and sophomore Nate Hawkins crisscrossing shots across the field. With seconds to spare, the gold team took advantage of a faulty switch in position and took out both Bornarth and Dickerson to win the tournament.

"It's a little more nerve-wracking playing your teammates," Burns said. "I'd say it was gratifying beating them, but all in all everyone was there for the fun."

The Flames' deep roster, tournament wins, and national ranking are not the only things that differentiate them from their opponents. According to Hoglund, "With the Liberty team, us living our Christian lifestyle speaks volumes. Teams see that, and they know that something is different about us."

"We want to shoot for the top every single year and show people what we are really here to do: To play to the best of our ability so that we can actually glorify God," he said.

For the Flames' next match, Nov. 2 at the University of Kentucky, the question as to which Liberty team will place first still looms in the minds of the players.

"It's anybody's game right now between gold, red, and blue," said junior Neal Clement, of the blue team. "Anybody on these top three lines, I guarantee will be in the top,"