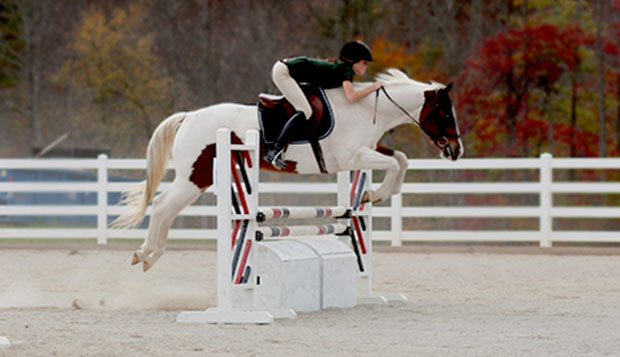 Liberty University's first-year women's equestrian program will have a chance to participate in its first competition Saturday at Randolph College's Riding Center near Lynchburg.

Since they have a new team, the Lady Flames will be required to audit the season-opening Intercollegiate Horse Show Association show, featuring several of the teams from Region 2 of Zone 4, which Liberty has been assigned to.

"We'll be auditing at least the first competition, which is a requirement for our region prior to competing," Lady Flames head coach Caroline Trexler said.

If all goes well on Saturday, the Flames will be able to compete in their first show Oct. 25 at Hollins University in Roanoke, a day before hosting the annual Fall Festival at the Liberty Equestrian Center on Oct. 26. That event will be followed by additional shows Nov. 2 at Bridgewater College and Nov. 17 at Sweet Briar College.

"It'll be an exciting opportunity, nerve-racking, but exciting," Trexler said, noting Region 2 is one of the strongest in all of Zone 4. "Competing with the best allows you to become the best."

Besides Randolph, Hollins, Bridgewater, and Sweet Briar, other schools in the extremely competitive region include James Madison University, Longwood University, Lynchburg College, Mary Baldwin College, Radford University, Roanoke College, the University of Virginia, and Washington & Lee University.
"Typically, the top teams in the standings are not only the teams that are most talented, but also the teams that can go to the most shows, so they'll all likely be at that first competition," Trexler said. "The more horses they have available, the more riders will get a chance to participate."

Originally, the Lady Flames were only going to compete with a team of three or four riders their first season, but after Trexler met with Kirk Handy, Liberty's senior director of campus recreation, she was given the go-ahead to expand it to 15.

"We ended up having a phenomenal turnout," Trexler said before the team's final tryouts. "We've had a pretty good distribution and span of experience, so it's worked out well."

The expanded roster will give the team the depth needed to fill the eight divisions of hunter-seat equitation offered, from beginner walk-trot through open over fences.

"Because of the setup of IHSA, it will really benefit us to have those extra people," Trexler said. "You ideally want to plug people into each division, so in a perfect world, you would have at least eight people showing."

As a beginning program, the Lady Flames want to represent Liberty well and establish a strong foundation for their future in the sport.

"Our spring schedule includes shows Feb. 7 at Hollins, Feb. 9 at Sweet Briar, Feb. 15 at Bridgewater, then Feb. 21 at UVA, which will host the regional finals on Feb. 22," Trexler said. "Typically, at your regional finals, they take the top two teams and the top two riders and then the top of those go to the zone championships in April and the top of those go to nationals in May on both an individual and a team riding basis, which we're hoping for. We don't want to put too much pressure on the team this year, but that would be really awesome."

Liberty's hunter-seat riding coach is alumna Lori Matthews, a professional who has 45 years of experience with horses, ranging from training equestrian riders to race horses.

"I've always thought Liberty would be a great place for an equine facility so when it started up, I was really eager to jump on board," Matthews said. "It's fun to make a riding team. The goal is to develop horse women, to get a rider that can unite with any horse that she sits on."

In shows, riders don't bring their own horses, but ride the ones provided them by the event's host.

"There's no chance to practice, so they just get on them cold and really can't do anything but go into the ring and compete," Matthews said. "We want to expose them to as many different types of animals as possible, so that they're ready for anything. When you have horse-show nerves, you want to make sure your rider feels confident going into the ring."

She said the rider's actions dictate how gracefully the horse performs.

"How your horse really is over the fence has a lot to do with how the rider presents the horse to the fence," Matthews said. "We want to equip them to be ready to handle whatever they're confronted with."

Trexler said she and Matthews have done their best to prepare their riders to establish quick bonds with their assigned horses.