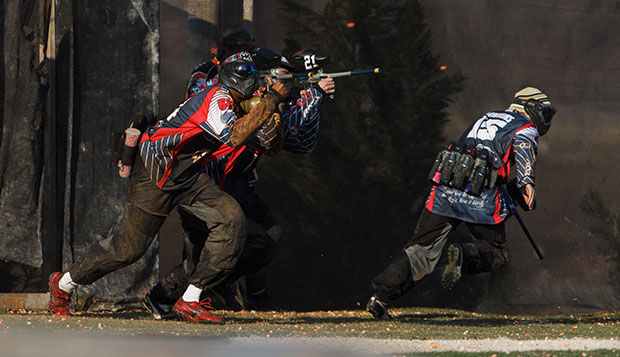 Liberty junior captain Aaron Thompson (64) and assistant captain Noah Burns (21) will lead the charge for the gold team, one of five who will compete for the Flames this Saturday at home.

A record turnout of 26 players will enable Liberty University's paintball team to go to battle with plenty of reinforcements this season.

"We definitely have one of if not the biggest program in the country right now," said Flames head coach Todd Hoglund, who plans to field five full teams for Saturday's Liberty Open, with a total of 10 other teams expected to be in the fray. "It's typical to have one or maybe two teams and it's very rare for a school to have even three rosters or lines. We've had four before but this is the first time we've had five."

He said having numbers to draw from gives the Flames, who finished fourth at the 2010 and 2011 National Collegiate Paintball Association championships, a huge advantage.

"With a larger player pool, we're able to really see who our top players are instead of relying on what five guys show up," Hoglund said.

Half of the players on this year's team are returning and half are new, with varying levels of experience.

"We have an overwhelming number of players looking to play at a top level," Hoglund said. "Beyond that, we're able to take players at a lower level and improve their skills and abilities."

Five schools — defending champion Georgia State, East Carolina, N.C. State, Radford, and VMI — have confirmed they will be competing in Saturday's first Mid-South Collegiate Conference event, which starts at 8 a.m. and is expected to end by 4 p.m. at the Liberty Paintball Fields. Lynchburg College, which scrimmaged the Flames and ECU this past Sunday on Liberty Mountain, Clemson, and James Madison also are likely to make the trip.

"We can take up to 20 teams, but we've only got 10 signed up," Hoglund said, noting most of the other schools are only bringing one team.

The Flames will field two top-level teams clad in gold and red, two with middle-range players dressed in white and blue, and one with less-experienced shooters, all brand new to Liberty, sporting black.

"All five should do well," said Hoglund, who wouldn't be surprised if Liberty's gold and red teams meet in the championship match Saturday, and for the white and blue squads to advance to the semifinals. "Our team has definitely improved, while the talent on the other teams is about the same. We have a good solid group of guys that have been training really hard and they're ready to defend their home field."

The black squad is the only one with a sixth man available as an alternate.

"If there's an injury, we have to suck it up or play with four," Hoglund said of the other four.

Liberty returns junior team captain Aaron Thompson and senior assistant captain Noah Burns, who has been playing especially well on the "snake side" of the field, on the gold team.

The red team features two new players Hoglund is excited about, Dan Brown, who plays on the "Dorito side," and snake side specialist Aaron Westafer.

"Both of those guys are new to the team and have a lot of potential," Hoglund said, noting Westafer has been training with former Liberty player Ben Konechne at River Valley Ranch in Maryland.

Hoglund said the Liberty Open will use a fairly standard layout of inflatable obstacles, with the Dorito side on the far side and the snake side on the near side from the spectators' point of view.

"This layout is pretty aggressive," Hoglund said. "There should also be lots of play up the middle, which should be exciting. Any time players go up the middle, it's an attack move and either something good happens or something bad happens."

He said this season's teams have developed good chemistry and strategy and shown good judgment as to when to attack and when to play it safe.

"We've trained them pretty well to know when to move, when to hold their position, when to go from offensive to defensive," Hoglund said. "Their game plan is to stay on the offensive as much as possible. Typically the teams that play intelligently aggressive are usually the teams that come out victorious."