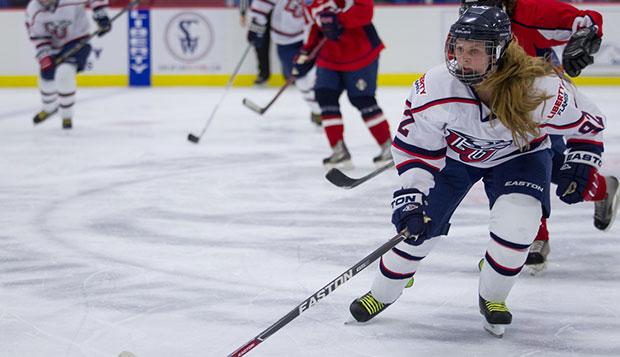 Freshman forward Courtney Gilmour maneuvers from the left wing in an exhibition game against the Tri-City (N.C.) Selects at the LaHaye Ice Center.

Engaged in another epic, 60-minute back-and-forth skirmish on ice, Liberty University's ACHA Division I women's hockey team and the Tri-City Selects wound up deadlocked in a 5-5 stalemate, Sunday afternoon at the LaHaye Ice Center.

The Lady Flames rallied from 2-1 and 4-3 deficits and gave up 1-0, 3-2, and 5-4 leads before finishing the exhibition stretch of their season with an even 1-1-1 record. Selects forward Kristy Knight netted the fifth and final tying goal of the day by threading a penalty shot past Liberty goalie Samantha Rupp with four and half minutes remaining in the third period.

Tri-City's all-time leading scorer, who scored two goals and distributed two assists in Saturday night's 4-3 win over Liberty, was awarded the shootout opportunity after the Lady Flames were called for hooking on a play that caused Knight to crash into the cage.

"The girls played a lot better today," Liberty head coach Paul Bloomfield said. "A couple girls were just missing in action yesterday and, whether it's jitters or what, the reality is we've lost three key girls from last year and getting the new girls in, we're going to have to work harder this year, I know that."

The Lady Flames had tied the contest at 4-4 when Nikki McCombe cleaned up a rebound of a driving shot by Courtney Gilmour in front of the net, where she stuck it past Tri-City goalie Kelsey Neumann.

McCombe was then credited with the assist on the go-ahead goal by Carrie Jickling with five and a half minutes left. Jickling, stationed deep in the right crease, punched in the rebound of McCombe's shot from near the left blue line for a fleeting 5-4 lead.

"Nikki's a hard worker and we benefit from those kind of players," Bloomfield said. "She's a big body and she's got long reach and all of those things really help her take her game to the next level."

Jickling helped lift Liberty to a 3-2 lead late in the second period by skating behind the cage and finding senior captain and defender Courtney Fischer open in the right crease, where she slammed in a short shot. But Tri-City's Carolyn Inhoff tied it back up at 3-3 with an incredible sliding shot 3:35 into the third period. As Inhoff crashed to the ice inside the right circle, she flipped the puck off the stick of two Lady Flames defenders before it glanced off Rupp's glove and the right pipe on its way into the net.

Amanda Grainger netted Liberty's first two goals, giving it a 1-0 lead 1:35 into the game before tying it up at 2-2 with 4:10 left in the second period, when she posted up in front of Neumann and redirected an entry pass from fellow junior forward Jenny MacArthur past the goalie.

"She's a gritty hard worker in front of the net," Bloomfield said of Grainger, who stands at 4-foot-11. "The puck hits the goalie and she's all over it. She gets those goals. They're not clean and they're not pretty but she just gets them from hard work."

Liberty again held a commanding advantage in shots, 47-17, but only had a tie to show for it.

"We outplayed them, but it just didn't show on the scoreboard," Bloomfield said. "These exhibition games give us an opportunity against a decent team to see what we're going to come up against and what we need to fix, what we need to improve on. We've got some hard work ahead of us."

The Lady Flames have less than two weeks to prepare for their first road trip and ACHA DI action over fall break, when they will travel to Michigan to face Adrian and Michigan State.

"We're going to have to really buckle down and be focused," Bloomfield said. "We had moments (Saturday) when we were strong and we had moments where it was almost like a different team. That consistency is something that we really have to work on."