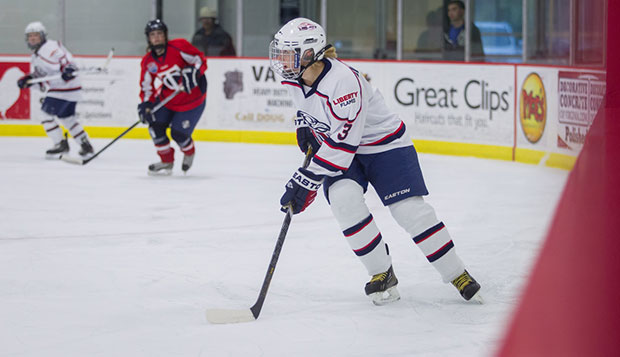 Liberty University's ACHA Division I women's hockey team battled back and forth with Tri-City Selects, a women's team out of the Raleigh, N.C., area, Saturday night at the LaHaye Ice Center.

But after erasing a two-goal deficit in the first period and retying the contest late in the third, the Lady Flames couldn't contain forward Kristy Knight, who set scoring and assist records for the women's travel team with 75 points last season.

Knight picked up where she left off in Tri-City's 4-3 victory, distributing two assists and netting two goals, including the game-winner with 20 seconds left in regulation. She gathered a loose puck after a Liberty turnover and finished a fast break into the upper netting past Lady Flames keeper Kristina Toppazzini.

Last year, Liberty edged the Selects by 3-2 and 2-1 scores en route to a 10-0 start. The Lady Flames went on to win nine of their next 10 games after that to earn the No. 1 ranking in the ACHA DI poll for the final two months of the regular season.

"We were all pretty nervous coming out in the season-opener because we lost a couple players from last year, including our top scorer (Stacey McCombe), but that opens opportunities for someone else to step up and put the puck in the net and overcome the players we lost," Liberty sophomore right wing Jenny MacArthur said. "I got a couple good looks, but I couldn't bury any of them, which I'm pretty upset about. But if we keep going hard, we'll get our share of goals. The puck's got to bounce our way."

Liberty dominated Tri-City in the shot department, holding a commanding 65-22 edge, but the Selects generated just as many quality scoring chances.

Knight put Tri-City on top just two minutes into the first period off an assist from Carolyn Inhoff before assisting Teagin Beaudin on a power-play goal for a 2-0 lead at the 11:00 mark.

Liberty struck back twice in the opening eight minutes of the second period to tie it up. Carrie Jickling got the Lady Flames on the scoreboard unassisted just a minute into the stanza before Courtney Fischer got a puck to bounce her way, chipping a shot over Tri-City goalie Kelsey Neumann from close range on a five-on-three power play.

The Selects recaptured the lead early in the third period when Joan Taylor gathered the rebound of her own shot the bounced off the right pipe and snuck it under Rupp for a 3-2 advantage. But Jickling forged a 3-3 tie with 7:35 to play with a quick finish off an assist from Nikki McCombe in the left crease.

It appeared the game headed for overtime before Knight delivered down the stretch. The Lady Flames had one last chance when Knight was called for a penalty in the closing 10 seconds, but couldn't counter on the power play.

"This game was good for us," MacArthur said. "It gives us knowledge about what we should work on in practice. It's good playing those type of back-and-forth games. We had some mental breakdowns and they scored a couple goals off of them, but we were working hard throughout the whole game. That's a strong team, but I think we'll get out there with the intensity we need for three periods tomorrow."

The two teams square off again at LaHaye on Sunday when the puck drops at 2:15 p.m.