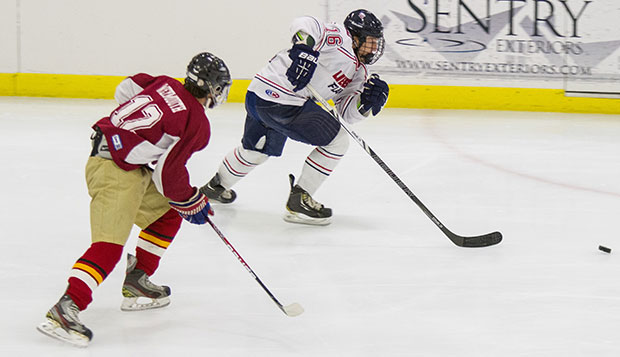 Liberty forward Peter Kazmierczak sprints past an Elon player to the puck during Friday night's 10-1 scorching of the Phoenix at the LaHaye Ice Center.

Physical play and crisp passing from the outset enabled Liberty University's ACHA Division II men's hockey team to burst out to an early lead on Elon, Friday night at the LaHaye Ice Center.

Freshman forward Devon Docksteader completed the first hat trick of his career and the Flames torched the Phoenix for the second season in a row, 10-1.

"We've been really focusing this week on guys keeping their legs moving and finding that intensity," Liberty head coach Chris Lowes said. "We wanted guys to really get to their spots quicker and put on pressure and create more turnovers and overall, it was better."

A year ago, the Flames smoked the relatively new Phoenix by an 8-0 count at LaHaye, outshooting their guests by a 78-7 margin. This time, that total wasn't quite as lopsided, but Liberty still dominated by a 46-15 count.

Just a minute after the opening faceoff, Docksteader received a through pass from fellow freshman forward Jordan Barstead in the right crease, pivoted and snuck a backhanded shot past Phoenix goalie Brad Feldman for a 1-0 edge. Five and a half minutes before the first-period intermission, Barstead assisted freshman defender Daniel Huntington's wrist shot from near the right blue line that was deflected past Feldman for a 2-0 lead. Huntington later returned the favor, assisting Barstead with another shot from the blue line that Barstead tipped past Feldman for a commanding 9-1 advantage.

With just over a minute remaining in the first period, senior forward Bobby Cervone controlled an entry pass from freshman defender Ryan Sidun and poked it inside the right post a split second before crashing into the pipe, jarring the cage loose.

Trailing 3-0, the Phoenix was already rattled by that point, and soon started to crack under the pressure applied by the Flames all over the ice.

Jeff Boschman pushed Liberty's lead to 4-0 just 75 seconds into the second period with a slapshot from deep in the right circle set up by Peter Kazmierczak and Brandon Cox. Cervone later leveled Elon's Demitri Marken with a crushing body check at mid-ice before setting up freshman forward Ben Freymond for an apparent score, disallowed by a crease violation.

Eight minutes later, Josh King did extend the Flames' lead to 5-0, finishing a feed from behind the goal from fellow sophomore forward Eric Burke near the left post by beating Feldman through the five-hole.

Liberty surrendered its shutout, but doubled its scoring output from the first two periods with five more goals in the third, starting with a wraparound shot from behind the right post by Docksteader and punctuated by a wrist shot from point-blank range by older brother Brad Docksteader into the top left shelf off an assist from Paul Ingles.

Devon Docksteader put the finishing touches on his hat trick on a rebound of a long shot by junior defender Clinton Nigh that he neatly tucked into the net to make it 7-1. Seventy-six seconds later, Freymond got on the scoreboard with the first goal of his Flames career on a swift backhanded finish of an assist from the left wing from Kazmierczak.

Lowes got a chance to rest some of his starters, but their replacements kept the pressure on.

"We definitely lengthened our bench, we played a little more down the line, all four forward lines and seven (defenders), but the mentality shouldn't change and that what we were preaching, that we still want the same intensity of a tie game," Lowes said. "By no means were we asking our guys to slow up and stop putting them in the net. We still wanted to see execution and attention to detail, and you need to keep the intensity up so that way you're ready for the next game."

Liberty returns to its home ice today at 3 p.m., when it can expect a much stiffer test from Millersville, which went 14-6-3 in the Northeast Region last year.