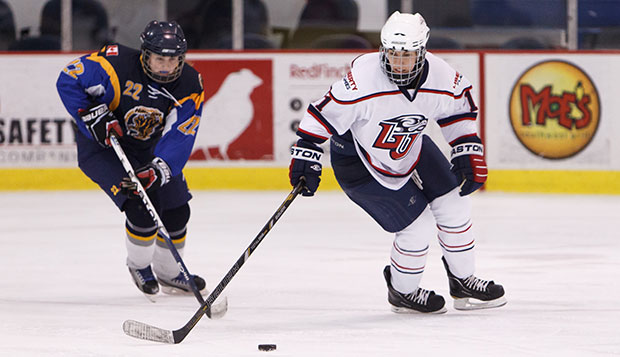 After leading the Lady Flames with 16 assists last season, Sarah Stevenson (right) could be more of a scoring threat this year, as she showed by netting the game-winning goal in the closing minute of last month's exhibition game against the Hamilton Hawks at the LaHaye Ice Center.

Though team depth isn't quite what he'd like it to be to start the season, Liberty University Division I women's hockey head coach Paul Bloomfield is cautiously optimistic as the Lady Flames open their season against the Tri-City (N.C.) Selects on Saturday at 6 p.m. and Sunday at 2:15 p.m. at the LaHaye Ice Center.

Liberty advanced all the way to the ACHA DI national championship game after being ranked No. 1 in the national poll for the final three months of last season. However, after graduating three of their top five scorers from last season, the Lady Flames landed just two new recruits, forward Courtney Gilmour and defender Marissa Graham, who scored the tying goal in a 2-1 exhibition win over the Hamilton Hawks last month at LaHaye.

Two other players didn't come back and Liberty must await the return of forward Catharine Burrell and defender Madison Fischer, who are recovering from offseason knee and ankle surgeries, respectively. That leaves 15 active players on the roster to start the season.

"We're a little thinner on the bench this year," Bloomfield said. "We've got enough bodies for three lines, but we need everybody and we've got to keep everybody healthy because we have no extras."

In the meantime, Bloomfield is looking for others to step into leadership roles.

"It's been good to see the freshmen of last year taking on more responsibility," he said, referring to sophomore forward Carrie Jickling and defenders Jenny McArthur and Brittany Hymers. "We'll be counting on them to settle down and get accomplished what we need to get accomplished."

"Amanda comes through with goals and she gets them through hard work," Bloomfield said. "Sarah Stevenson (who led the Lady Flames with 16 assists) is very quick. We may put her and Amanda and Courtney (Gilmour) together on the same line and see what happens."

The Lady Flames could be stronger on the defensive end at the start of the season. They will rely on senior captain Courtney Fischer, Madison's cousin, junior assistant captain Autumn Kucharczyk, Graham, Hymers, McArthur, and Sarah Fowler in front of a trio of talented goaltenders.

"Marissa is just a freshman, but she is big and has experience and I'm counting on her to adjust quickly (to the college game)," Bloomfield said. "Hymers and Autumn Kucharczyk are steady and Courtney (Fischer) is very dependable. She's big and strong and she doesn't make mistakes."

Sam Rupp returns for her third season in goal after logging 1,140 minutes between the pipes last year, when she ranked among the ACHA's leaders with a 1.05 goals-against average, a 94 save percentage, and six shutouts. Fellow junior Chantal Lischynski, who started as a freshman before being sidelined by injury, and sophomore Kristina Toppazzini didn't get as much ice time last year, but they held their own when they were in the cage. They were credited with six shutouts themselves and Lischynski boasted a 1.00 goals-against average and 95 save percentage.

"Chantal may get more playing time this season," Bloomfield said. "She's as healthy as she's going to be, and has the determination. She wants to be more active in her role."

They will be tested this weekend as the Tri-City Selects feature forward Kristy Knight, who set team records in goals (49), assists (26), and points (75) last season.