Liberty holds its own in first ACAT scrimmage in Lynchburg 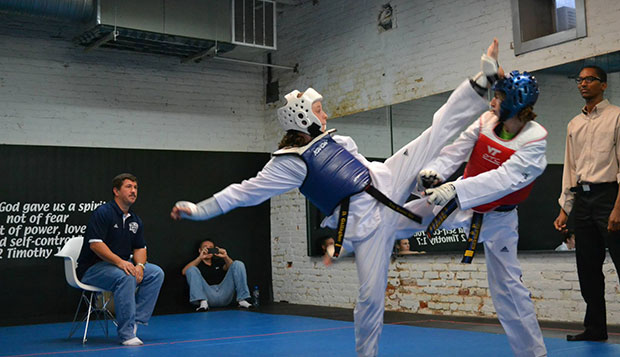 Freshman Danielle Gallagher competed in the lightweight women's black belt final and landed a powerful kick to the head of her opponent from Duke even after sustaining an injury that relegated her to kicking with one foot.

"Basically, going into it, what I wanted to do was to throw as many kicks as I could," Kader said after his decisive victory. "Even if I didn't make contact, my goal was to try to intimidate my opponent, keep him from being sure about kicks he was going to throw, basically get in his mind to make him hesitant."

The physically and psychologically imposing style kept Kader on the offensive throughout his two-round match at the Renaissance Academy of Martial Arts of Martial Arts in downtown Lynchburg, his first official competition after training at his tae kwon do school near Rochester, N.Y.

Also for the Flames' men, John Flores won the beginner heavyweight division and Andrew Baab placed third behind competitors from North Carolina and Duke in the intermediate middleweight class.

Gallagher trailed after the first round and injured the top of her right foot when her kick was blocked by her opponent's elbow.

"She was way behind at the end of the first round and she had a huge knot on the top of her foot, making it difficult for her to even walk," Liberty head coach Jesse Wilson said.

Despite being in excruciating pain, Gallagher stayed on her feet for the last two rounds, using just one leg instead of two to kick with.

"She was able to close the gap and at one time even tied the score," Wilson said. "At one point, she landed a great kick to her opponent's head and I thought she had knocked her out, but it only stunned her for a moment."

Though she finished second, Wilson said Gallagher was the one everyone was talking about at the end of the competition.

"Her emotional and physical endurance and determination to finish despite her injury had everyone cheering her on as it came down to the final seconds of the third round to see who was going to be the winner," he said.