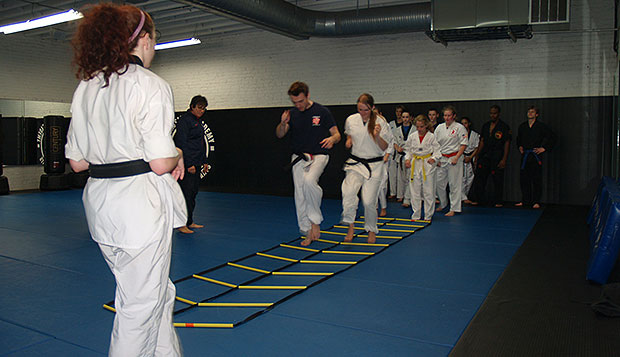 Members of Liberty's tae kwon do club run through a ladder drill to improve their footwork during Sunday's seminar with Arlene Limas at the Renaissance Academy of Martial Arts in downtown Lynchburg.

On Sunday, participants had the opportunity to train under Arlene Limas, the first woman to earn a gold medal for the United States tae kwon do team. Limas, who taught freshman Danielle Gallagher at Power Kix Martial Arts in Stafford, Va., led a seminar from 1 to 3 p.m. at the Renaissance Academy of Martial Arts in downtown Lynchburg, where the Flames hosted their first scrimmage on Saturday.

"We had a great time and it was an honor to work out with her," Wilson said. "I believe that with the insight and support given to me by my instructor, Ju Hun Kim, a former Korean National Champion, and Ms. Limas, a 1988 gold medalist (in Seoul, South Korea) that we will be nothing but the best, helping the team to grow and develop to its maximum potential."

Wilson said Limas was impressed with how far Liberty's tae kwon do team has come in just one year.

"She indicated to me that we are definitely going in the right direction with our training," he said.

"She covered some good countering tactics and gave some personal time to each of the team members," Wilson said. "She encouraged them in both their studies and their athletic endeavors."

Limas has watched several tae kwon do competitors advance to the Olympic realm without the education needed to prepare for a job in the real world once their competitive days are done in a sport that has high incidents of injury.

"She wants to help promote collegiate tae kwon do so that these athletes not only continue their training, but also get a quality education to go along with their talents," Wilson said.

Limas also expressed her interest in developing a personal and professional relationship with the Flames' budding program.

"Just as the Kim School of Tae Kwon Do is our parent martial arts school, she would like for us to go into a ‘partnership,' to help sponsor our team and aid in any way she can," Wilson said. "She would like to donate training equipment and asked me for a ‘wish list' of items that we need."

That includes the use of her training facility, where Liberty may "host" its next ACAT event.

"She has more than 12,000 square feet of space with three Olympic regulation rings and all the scoring systems needed to adequately and professionally host events," Wilson said.