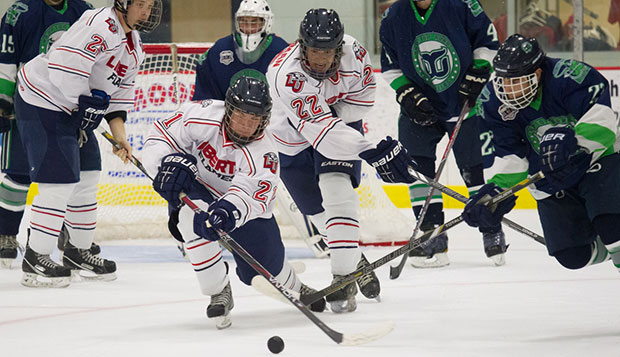 Liberty freshman Jordan Barstead (21) and sophomore Jeff Boschman (22) scrap for a loose puck in front of the Hampton Roads cage at the LaHaye Ice Center.

While LU's gridiron gang put up 38 points on visiting Morgan State across the street at Williams Stadium, Liberty's ice men racked up nearly a dozen goals in an 11-4 rout of the Hampton Roads Junior "B" Whalers.

Sophomore forwards Paul Ingles and Jeff Boschman completed hat tricks within 24 seconds of one another in the second period before sophomore defender Parker McIntyre, a Division III call-up, stretched the Flames' advantage to 10-2 by period's end.

"It was a little bit of a lopsided game, but they're fun," Ingles said. "Good first games to get the boys going together."

Liberty held a three-to-one shot advantage, 66-22, and scored three power-play goals. The two teams were whistled for 28 penalties, one more than the DI game that preceded it.

"We dominated them early," Flames head coach Chris Lowes said. "We outshot them pretty heavily and it was good to get some production out of our power play."

If the Flames' Football game resembled a track meet, Liberty's DII hockey game looked more like a NASCAR event with bump-and-grind skating and players being slammed into walls left and right, not to mention a couple late-Saturday-night adrenaline-boosting fistfights thrown in during the third period.

"The emotions were running and that happens in a game when the score's starting to get away," Lowes said. "Obviously, they're trying to protect their net and our guys are still battling, so that happens. No fault on either side. It's just part of the game. But the guys did a good job to take care of each other. It's good to see some passion and intensity out of the guys."

Justin Gortman and Cary Byron split time in goal in place of regular starter Nick Devine, with both giving up two scores the last two by Jared Gale in a minute-and-a-half stretch in the middle of the third period.

"I was a little disappointed we gave up a couple goals there in the middle," Lowes said. "We made a couple defensive miscues. That just comes with a bit of sloppy play in a one-sided game. We'd like to see the guys stay focused and battling like it's a tie game.

"All in all, there were a lot of positives and we'll get some good video to review to make some adjustments before next week's games," he added of next Friday's and Saturday's home dates with Elon and Millersville, respectively.