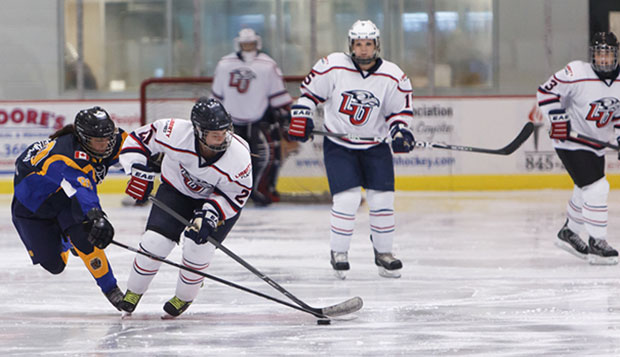 "It was definitely interesting," said Harris, whose team arrived on Tuesday to hold a training camp on Liberty's home ice. "Would have loved to beat them, but it was a good experience, and the better team won, I think. They're going to be a strong team again this year. I would love to see them win nationals and it was a lot of fun to coach against them."

With just 23 seconds left in the third period, Lady Flames junior forward Sarah Stevenson followed her own shot and snuck the puck inside the right post past Hawks goalie Alison Dungey, allowing Liberty to escape with a 2-1 triumph.

"We lost a lot of offense from last year's team, so this year we kind of reminded (Stevenson) that we're going to need a little more offense from her and I think she's able to answer that call and she proved that tonight," Lady Flames assistant coach Justin Forth said. "She hit a couple posts and then she finally finishes it at the end, gets the game-winning goal so that's the kind of stuff we like to see."

Lindsay Hall gave Hamilton an early lead by slipping the rebound of a shot by Meghan Subic under Liberty starting goalie Kristina Toppazzini from deep in the left crease.

"We had an advantage," Harris said. "Our team's been skating all summer (whereas) Liberty, they're in their first week of practices and that was their first game. I think they came out strong, they got better as the game went on. We put them on their heels a little bit with that first goal."

Former Hamilton forward Courtney Gilmour, also playing in her first game for the Lady Flames, nearly tied it up when she intercepted a pass, skated up ice and launched a shot. However, Hawks starting goalie Alyssa Godin saved that as well as Nikki McCombe's follow.

Marissa Graham, a freshman defender from Alberta, Canada, tied it up for the Lady Flames 2:33 before the first intemission with a left-handed wrist shot into the upper netting from deep in the left circle. That shot was assisted by fellow defender Autumn Kucharczyk and sophomore forward Carrie Jickling.

The game remained tied at 1-1 for the next 32 minutes before Stevenson's late heroics.

"It's disappointing not to come out with at least a tie, but I'm very proud of our girls," Harris said. "It was a back-breaker, but our girls fought back and they didn't quit the entire game, which is really good. Both teams played strongly."

Forth wasn't surprised the game remained in the balance until the final seconds of regulation.

"They're a good team, they always have been, and it's the same story every year," he said, noting this was the third season in a row the Lady Flames opened the season with an exhibition against the Hawks. "We're usually 1-1 going into the third and we usually win by one or two."

After Toppazzini allowed the Hawks' only goal in the first period, Liberty goalies Chantal Lischynski and Samantha Rupp posted shutouts in the second and third, respectively.

"They're the best three goalies in the league," Forth said.

He said the contest, nearly a month before Liberty's official opener against a women's team from Raleigh, N.C., on Sept. 21 at LaHaye, showed him and head coach Paul Bloomfield what skills they need to sharpen the most.

"It's good for both teams," Forth said. "Hamilton gets to play one of the better teams in the ACHA, and it's good for us, too, to see where we're at, get a game under our belts, and it helps us as coaches to really see the different things we need to work on."

Implementing the team's offensive and defensive systems, as well as working on forechecking, will be the first orders of business in early-season practices.

"Defensively, we were a little sloppy, so we need to go over a lot of the systems," Forth said. "Offensively, we're just trying different line combinations. We were just getting the girls on the ice this week, to try to get their legs, get their hands back. Mostly, we've just got to get everybody on the same page so they know their jobs."