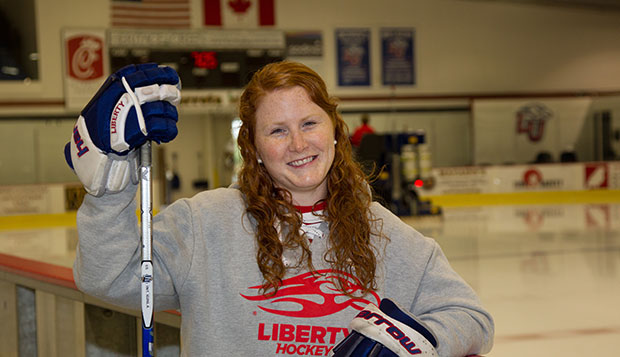 Prior to Thursday night's practice with the Lady Flames, Hamilton Hawks assistant coach Brooke Harris feels right at home in the LaHaye Ice Center, where she played for four seasons. The two teams will square off today at 4:45 p.m.

There will be a familiar face on the opposing team bench for Liberty University's  ACHA Division I women's hockey exhibition opener, set for 4:45 p.m. today at the LaHaye Ice Center.

For the third straight season, the Lady Flames are hosting the Hamilton (Ontario) Hawks, featuring Brooke Harris, a 2011 Liberty graduate, as an assistant coach. The team arrived in Lynchburg on Tuesday and has been using this week as a training camp for their Senior "A" season, which officially starts with a tournament next weekend in Canada.

"Our team's been practicing all summer, but it is fun to get back here and the first time I stepped on the ice, it felt I was home again," Harris said. "Absolutely, I think it always will be. The most important years of my life were here. It's nice to come back once a year and see all of the campus changes in one year and it's good to see a lot of familiar faces that are still here, even though it's been a while, and it's good to see coach (Paul Bloomfield) again."

Today's game will also be the first in a Lady Flames uniform for freshman Courtney Gilmour, who played for Hamilton the past two seasons under Harris, serving as an assistant captain the first year and captain last year.

"I've known her since she was little and now I've coached her for two seasons," Harris said. "She was a center. She was very much a key player, put on in important situations — power plays, penalty kills, last minute of the game, stuff like that. It should be exciting and I'm going to follow her all year, follow her stats and stuff like that, to see how she does. I'm very excited for her. She should do good."

As a player at Liberty, Harris served as an assistant captain as a junior and captain as a senior. She started out at center before shifting to defender.

"I was always a forward, and only played defense when I needed to, but because of injuries and player shortages and stuff, coach put me on defense and I realized I was actually a better defenseman than I was a forward," she said.

Now she works primarily with the Hamilton Hawks' forwards as an assistant coach, but is serving as the team's head coach this week in place of her father, Hub Harris, who wasn't able to make the trip.

"He actually had a heart attack two weeks ago, so he's at home recovering," Harris said. "He's good, though. He missed one practice and he should be back when we get back," in time for next weekend's first tournament.

She said her father, who coached her through high school, taught her more about the game of hockey than anyone else.

"I played for him for four seasons, which were the hardest four seasons of my life," Harris said. "I've always dreamed about coaching with my dad and now that I am, it's pretty cool. I grew up as a Hamilton Hawk, and now I'm giving back to the association I came from."

Bloomfield, meanwhile, gave her life lessons during her college years.

"I have learned a lot from (Bloomfield) from a coaching perspective," Harris said.
"(But) I have learned more from him about real-life situations, patience, character development, than I've ever learned from another teacher, not just on the ice, but off-the-ice."

The experience of traveling back to Liberty as a coach for the team she grew up playing on against the school she played for in college is rewarding for Harris, and eye-opening for the Hawks, who have developed a recruiting relationship.

"This will be our third year playing them," Harris said of the Lady Flames. "Every year that we've come here, we end up sending at least one player here. Catharine Burrell came with us the first year we came and then Courtney Gilmour from last year, so hopefully, one of the girls from this year's team will end up at Liberty next year."

She expects today's match against Liberty to be an extreme challenge for her young team.

"We're rebuilding, but we're getting there," Harris said. "With them being second last year at (ACHA DI) nationals, it should be interesting. It will be a good test for our team and they'll get their legs under them at Liberty."