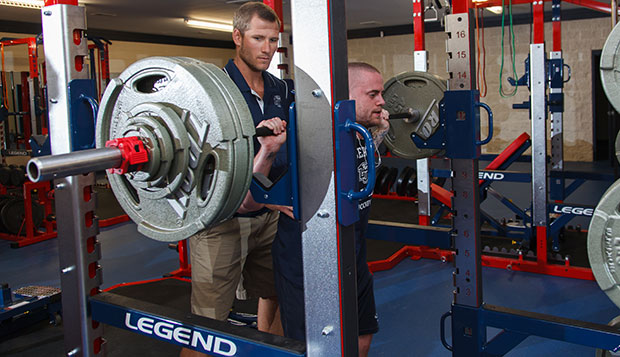 An increased emphasis on strength and conditioning will equip Liberty University's thriving Club Sports programs, and their individual athletes, to continue to grow and excel for the 2013-14 seasons and beyond.

"We did one year of really intensive training with the guys (in 2012-13) and the coaches noticed a huge increase in stamina and power," he said. "When they left, they loved working out. We instilled that in them."

A newly renovated athletic training facility and weight room was recently equipped to serve the more than 500 athletes who compete on Liberty's 32 Club Sports teams. The building, which formerly served as Liberty Christian Academy's football fieldhouse, located across Candler's Mountain Road from Macado's, is a major upgrade from the former weight room next to the Club Sports offices on the upper level of the LaHaye Ice Center.

Featuring a Liberty-branded red and blue color scheme, the facility will provide the essentials for a balanced workout geared toward athletes in any club sport.

"A lot of people will try to say ‘You need this machine or you need that machine,' but, honestly, it comes down to your basic lifts — your squat, your bench, and your power clean," Culkin said. "Those are the core foundation lifts."

The size of the room will allow a team of 36 athletes to use it simultaneously, rotating through different stations, under the supervision of one strength and conditioning coach.

When students start the fall semester on Aug. 19, Joe Amberlock, a rising senior Kinesiology major, will be in charge of conditioning as many as 10 Club Sports teams. He assisted Culkin last year as well as working with Bill Gillespie and Dave Williams — head and associate strength and conditioning coordinators for Liberty's Division I athletics program, respectively — in football and basketball since his freshman year.

"I always tell Kirk, ‘Give me as much as you can and I'll take care of it,'" Amberlock added. "The more the better."

Amberlock is extremely driven to be the best in his field and bring out the best in the individual athletes and teams he trains.

"I love what I do," he said. "To me it's not work at all, it's my passion. Time flies when I'm working with athletes and I'm working on my craft. If I'm not busy doing it, I'm thinking about it and I get restless."

After originally arriving at Liberty as a basketball recruit, he said God has given him a clear calling for a career in strength and conditioning.

"I believe everyone has a purpose and if you're not constantly pursuing that purpose, you're wasting your time," said Amberlock, who is taking 26 credit hours in addition to starting full time with Club Sports this fall. "This coming semester, I really wanted to challenge myself and put the pedal to the floor a little bit."

Over the spring semester, Amberlock became the youngest ever to have articles published in four of the nation's most popular fitness magazines, writing about ways to improve in the bench press for "T Nation," articles on speed training and strength in "EliteFTS," a feature on deceleration in "Stack" magazine, and a story about recovery time in "Men's Fitness" magazine.

Currently, he operates his own online strength and conditioning consulting business and is developing new content for his website, Amberlockperformance.com.

He is eager to introduce the techniques he has learned under the tutelage of Gillespie over the past three years to new groups of athletes at Liberty.

"What coach Bill is doing primarily with the football team, it's revolutionary," Amberlock said. "I've had the opportunity and the blessing to work and train under him and a bunch of world-class coaches and to really take those methods and apply them in my own way."

His philosophy is to build teams from the bottom up, focusing first on the individual athlete and seeing the results translate across the board.

"Team chemistry is huge but individuals make teams better," Amberlock said. "If each player improves his game, the entire team will improve.  It's my job to make sure that each individual player is reaching his full potential athletically. That means the teams are going to get better, the programs get better, and all of a sudden, Club Sports are at a level they've never been."

way for the best results. He helped the men's DI hockey players make tremendous improvements in the way they worked out last year.

"Coming into the season, a lot of the guys never had trained seriously before, or if they had trained, they hadn't trained properly," Amberlock said. "When they implemented my style of training, the results completely skyrocketed. We had guys who barely made it on the team who made huge strides and helped the team in more ways than could have been expected."

The players' development has carried over into the offseason.

"From top to bottom, the hockey team has really impressed me with their work ethic," Amberlock said. "It's been the whole shebang with them — their diets, how they're playing, their speed on the ice. All of them are way faster, way more powerful, in better condition, with fewer injuries. They're more flexible, more mobile."

Besides training methods and motivational techniques, Gillespie and Williams have taught Amberlock how to conduct himself around athletes in a weight room.

"Both have helped develop my philosophy in a huge way," Amberlock said. "You're letting them know that you're always in their corner no matter what, that you always have their backs, and are always trying to get them to improve."

He continually raises the bar to keep athletes from becoming complacent and backsliding, using their teammates as accountability partners.

"Every time we train, I'm always creating competitive environments," he said. "Even highly motivated people have trouble pushing beyond what they think they're capable of."

Amberlock routinely asks the athletes he trains, "What are you going to do in your time at school to separate yourself from the crowd?"

He understands everyone responds in a unique way.

"Every athlete is different and you treat every athlete and every sport differently," Amberlock said. "As you work with your athletes, you kind of learn what makes them tick. Some athletes respond well when you get up in their face, some not so much."

He has trained women's teams as well and the same principles hold true.

"I've worked with women who love the intense type of training, who like to be motivated," Amberlock said. "Everyone is different. The real key is letting the athletes know you're doing your best to help them achieve their goals."