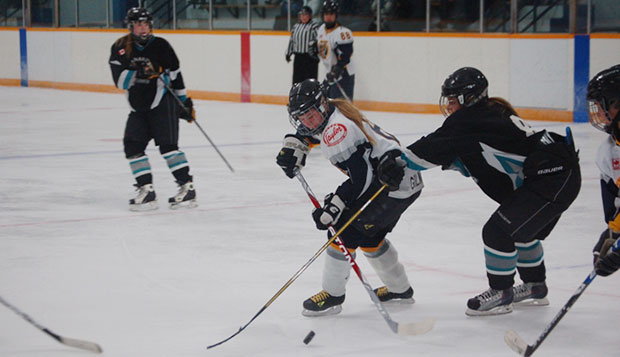 Hamilton Hawks forward Courtney Gilmour (center) handles the puck between two defenders last season. She brings finesse as well as a knack for scoring to the Lady Flames.

Marissa Graham says she committed to play for Liberty University's ACHA DI women's hockey team "as soon as I stepped on the campus."

That was at her second "College For A Weekend" event in May of 2012, late in her junior year at Wetaskiwin Composite High School in Alberta, Canada.

"I really wanted to go to Bible school, but I also wanted to play hockey and I didn't think that would be possible," Graham said. "I didn't know there were any Christian colleges that had a women's hockey team."

She inquired a bit more and sent an email to Lady Flames head coach Paul Bloomfield, who had then-assistant coach Josh Graham (no relation) go see her play during a trip to his home in nearby Calgary.

"He came and watched one of my games and talked to me," said Marissa Graham, who plans to pursue a business degree with emphases on marketing and finance. "It is a really good opportunity. I've had a dream about playing college hockey in the states. I'll be playing a sport I love and getting an education that I can use wherever I want to go in the world."

Another recruit for the upcoming school year, forward Courtney Gilmour, has played hockey since she was 3. She also was sold on Liberty right away, officially making an early decision to join the Lady Flames last summer after participating in the same CFAW event as Graham. While there, playing in a couple pickup games, she made a positive first impression on her future teammates.

"I hope they saw that basically I'm a team player and I never give up," said Gilmour, a forward from the same area of Canada as rising sophomore forward Catharine Burrell. "I hope I can really fit in with the atmosphere of the team, help with the growth of the team, and the progress they've already made."

Last year, she served as a captain in her third year on her hometown Hamilton "AA" Hawks, the team the Lady Flames will open their season against, Aug. 23 and 24 at the LaHaye Ice Center.

"I was a centerman, so basically, I was making sure I was covering both ends of the ice," Gilmour said. "I want to make sure I'm there for the rest of the team and working hard, making sure I'm doing the best I can do every time I'm on the ice."

By contrast, Graham got a relatively late start in the sport from a Canadian point of view, playing her first organized game at the age of 9.

"My dad didn't think I wanted to play, but I kept hounding him to play so he let me play and I loved it," she said.

Her parents shuttled their only child to and from practices and games at Sherwood Park, an hour's drive away, five to six times per week.

"It was hard to keep that up and keep my studies up," Graham said. "It took a lot of commitment."

Her commitment to Liberty was an easy decision and she expects to feel right at home on Liberty's campus, where the residential student body is only slightly larger than Wetaskiwin, population 12,000.

Graham also was a co-captain of the Sherwood Park Fury, a "AAA" team in the Alberta Major Midget Female Hockey League. That is the premier league in Alberta for high school-aged girls, also producing current Lady Flames goalie Samantha Rupp and fellow defenders Courtney Fischer and Madison Fischer, who hosted Graham during CFAW.

Though she is a defenseman, Graham ranked third on the Fury in scoring last season with 13 points, three goals and 10 assists.

"She is a very offensive defender," Bloomfield said. "She doesn't stay back. Some defenders prefer to stay home, but she's not afraid to take the puck and run with it."
She is sure to take care of her responsibilities on the defensive end first.

"I try to focus on protecting my players and protecting our zone," Graham said. "That's probably one of my stronger suits."

Though checking is illegal in the women's game, Bloomfield said, "It doesn't hurt to be physical. Marissa's going to be a big asset on defense. She's got good size, she's at least 5-foot-8, and she's a real solid kid. That's muscle."

"She has a great mind," Bloomfield said. "She thinks through the game well."

Gilmour, meanwhile, handles the puck with technical skill and precision on attack.

"Courtney's not real big, she's maybe 5-3 or 5-4, but she's got really good hands," Bloomfield said. "She's lacking in size, but she's got lots of speed … and finesse. Courtney's smooth with the puck and a stick in her hands."