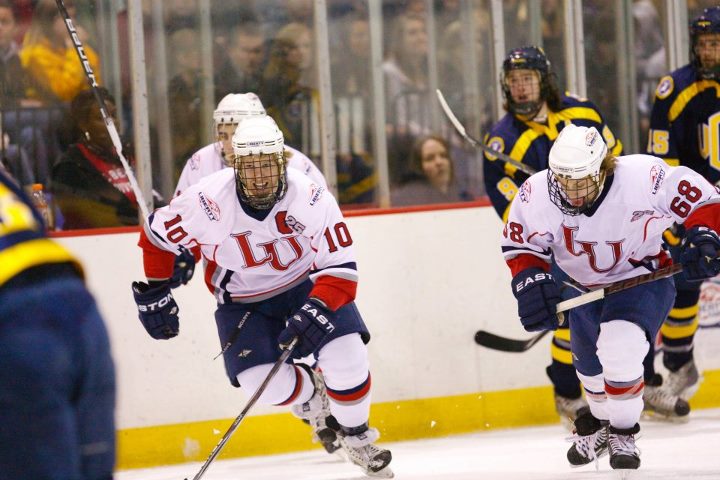 All-Time Series: The Flames have only faced the Bulldogs twice, winning one of the two matchups.

Scouting Liberty: Forward, Brent Boschman, continues to lead the team in points with 19 (5 goals, 14 assists). However, after not registering a point last week against Davenport, he no longer leads the ACHA in that category. Forward, Rick Turner, ranks third in the ACHA in goals with 12. It also should be noted that freshman forward, Luke Baumgarten has 8 points in just 6 games for Liberty. Jake Hannon and Josh Cornelissen are still tied for the team lead in points amongst defensemen, despite the fact that Cornelissen missed both games against Davenport. In net, Liberty goaltenders, Blair Bennett (4-0-2) and Clayton Brown (4-1-1), have split time, and both post the same save percentage with a 91%.

Scouting Adrian: .Adrian is led up front by sophomore forwards, Ryan Bachman and Logan Blackwell, both of which have 10 points for the Bulldogs. Bachman scored two goals against the Flames last year while Blackwell had a goal of his own. On the blue line, freshman Brandon Boelter has 5 goals and 4 assists and leads the defensive corps in points scored. Sophomore goaltender, Matt Anderson has played every minute in net for Adrian and is third in the entire ACHA with 539.50 minutes played. Anderson has an impressive 1.56 GAA and a save percentage of 93%. Like Liberty, Adrian's senior class is very small, consisting of only 4 seniors.

Previous Matchups: Liberty opened their season last year against Adrian at the Lahaye Ice Center and split the series 1 to 1. The Flames won the first game by the score of 2-1 in overtime. Brent Boschman scored the OT winner, and Blair Bennett made a whopping 46 saves to get the Flames the victory. The Flames dropped the second game by a score of 5-1, and Andrew McCombe netted the only goal for Liberty.