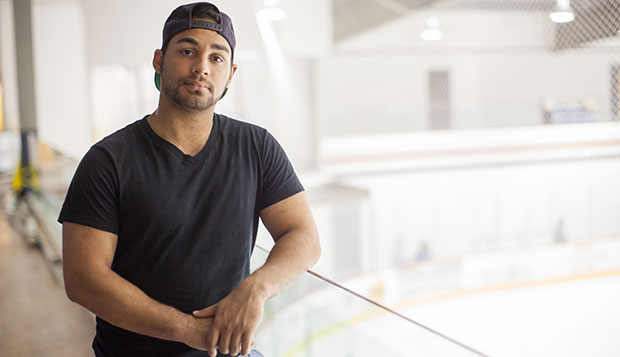 Cleveland native Charles Williams, who played the past two seasons in Canada, visited the LaHaye Ice Center last week when he officially committed to join the Flames this fall.

Though his natural position is center, Liberty University Division I men's hockey recruit Charles Williams doesn't always try to be the center of attention on the ice.

"I'm a guy who likes to use my time and space to my advantage," Williams said Friday afternoon from the upper level of the LaHaye Ice Center after committing to play for the Flames this fall. "I have good poise with the puck, so I have a good shot, but I like to set people up also. Moving the puck around, that's the best way to score a goal. Get it in open space, create opportunities, and let somebody else bury the puck if they're open. That's how you win."

Williams (5-foot-8, 190 pounds) is not so attack-minded that he neglects his defensive responsibilities.

"I like to play down low and take care of my defensive zone," he said.

Flames head coach Kirk Handy said the style of hockey Williams showcased as one of the captains of the Milton Icehawks Junior ‘A' Team in the Ontario Junior Hockey League last year should translate well to Liberty as it competes in the American College Hockey League.

"He's someone who plays a physical brand of hockey which is something we like, but he can also chip in offensively," Handy said. "He plays a strong two-way hockey game and he's someone who can score goals. Those are things we're looking for and those are keys for him coming here. We're excited about Charles, who is another piece to the puzzle we believe to make our team successful moving forward."

Originally from Cleveland, Williams, 21, moved to Pittsburgh for his high school years before playing the past two years in Canada.

"I love all sports, really, but hockey and baseball are really the ones I excel in," said Williams, a left-handed shooter who also played centerfield for his high school baseball teams.

As a teenager, Williams played on the Pennsylvania Penguins with current Liberty DII forward DJ Dinnison, who put him in contact with Handy this spring.

"I am definitely excited to play Division I hockey," said Williams, who plans to study either sport management or communication studies to become a sports broadcaster.

Williams adds depth to a position that should be a strength for the Flames next season after also adding Robert Ward, another center from Ontario, last month.

"We feel pretty good with Lindsey (LeBlanc) and (Christian) Garland, (Danny) Logan, guys like that who have played center for us, (Kyle) Garcia, that's four already, not even looking at Ward and Williams," Handy said.

The Flames will have plenty of flexibility at forward, including incoming wing Brandon Mistal, a recruit from British Columbia.

"We'll probably keep 14 or 15 forwards, five lines of forwards," Handy said. "It'll be good to see where everyone fits in in August."