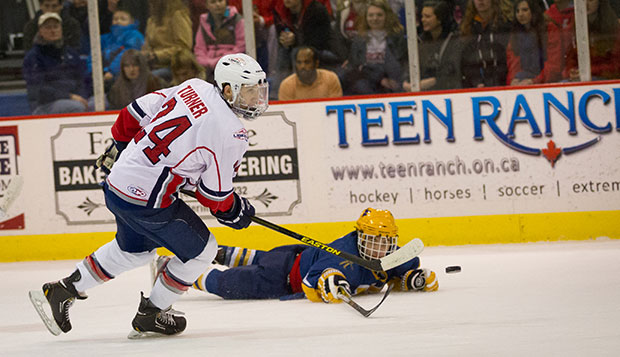 Forward Rick Turner finished as the Flames' fourth-ranked scoring leader after a senior season in which he finished fourth in ACHA DI with 75 points (43 goals, 32 assists).

Two Liberty University American Collegiate Hockey Association Division I men's hockey players — one senior and one freshman — were recognized in May for their performances during the 2012-13 season.

Senior forward Rick Turner, who ranked fourth in the league with 75 points on the year, was selected to ACHA DI All-American first team and freshman defenseman Steven Bellew was honored on the ACHA DI All-Rookie Team.

"It is exciting for both of them," Flames head coach Kirk Handy said. "They both worked hard in order to be successful this season. We look forward to having Steven back for another three years and wish Rick all the best as he moves on to try to continue his playing career."

Turner, a 6-foot-2, 180-pound speedster from Auburn, Mich., blessed with an even faster slap shot, netted 43 goals, including three game-winners, and 32 assists to finish his career as the Flames' fourth-leading all-time scorer. He also won the shootout competition and placed second by one-tenth of a second in the fastest-skater event at the March 16 ACHA DI All-Star Game hosted by Ohio University in Bird Arena in Athens, Ohio, and scored a goal for the winning side in the 12-9 triumph.

"Bellew has the offensive skill, but is a very tough D to play against," Handy said. "We expect big things of him this year."

The Flames (24-14-2) finished last season ranked No. 13 nationally after being eliminated by Ohio in the second round of the ACHA DI national tournament at The Edge Ice Arena in Chicago.

"As far as our team, obviously it is another indication of the quality players that we are able to recruit to Liberty," added Handy, who has added two Junior A players from Canada, Brandon Mistal and Robert Ward, to next season's team in recent weeks.