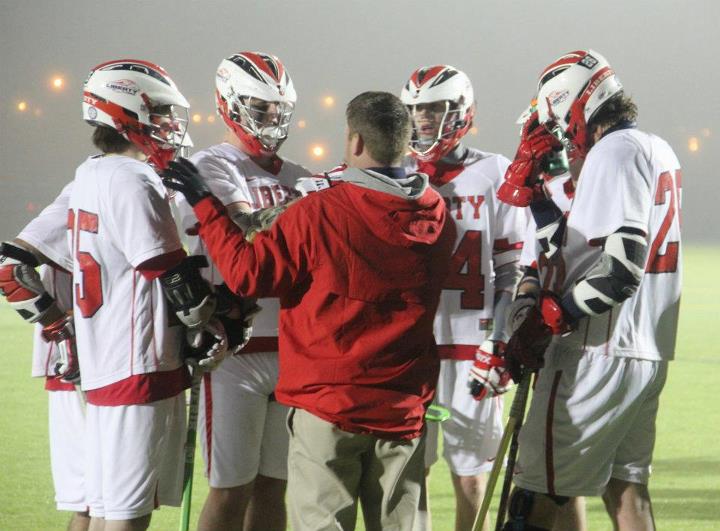 The Liberty University men's lacrosse team opens up their run for aSoutheastern Lacrosse Conference title this afternoon against the Chanticleers of Coastal Carolina.

Liberty (7 – 3 / 3 – 1) finished second in the Northwest Division of the SELC this season after falling to Elon University in the season finale. This will be the Flames' first SELC Tournament appearance in just their sophomore season of existence.

Coastal (10 – 1 / 4 – 0) finished atop the standings of the SELC's Northeast Division with a perfect conference record. The Chanticleers enter this year's tournament on a five game win streak and hope to advance past the first round for the first time. Last season, Coastal was eliminated by Elon, the 2010 conference champion and 2011 runner up.

Both teams are stacked on offense boasting two of the top three goal scorers in the conference. Kurt Tobias for Liberty has an astounding 51 points on the season with 34 goals and 17 assists. His 34 goals are second in the conference to Coastal's Ryan Redmond, who has 37 total goals.

It is not all Tobias however as Andrew Walker and Daniel Forbes have continued to get it done for Liberty this season finishing with 35 and 33 points respectively. If Liberty wants to advance to the second round, their offense will have to produce against the second best goalie in the conference, Christopher Yelle. The freshman Yelle out of Baltimore touted a .686 save percentage this year only giving up 60 goals in ten games.

Out of their six common games this season, both programs defeated Davidson,Reinhardt, Wofford, College of Charleston and The Citadel. The only team that both teams did not defeat was the aforementioned Elon. Liberty dropped a nail biter to Elon in the season finale while Coastal escaped with a 6 – 5 win a few weeks prior.

Liberty and Coastal have faced off once before in February of 2011 with Liberty winning 9 – 8. In that contest, Tobias found the back of the net five times and Asa Keimig had a stellar performance in net tallying nine saves.

Although it has been over a year, you can expect a very competitive game from both programs once again. The Flames are 4 – 1 on the road this season so they are not only experienced, but comfortable on the road. Expect this one to be a down to the wire, knock down drag out fight to see who lives to play another day.