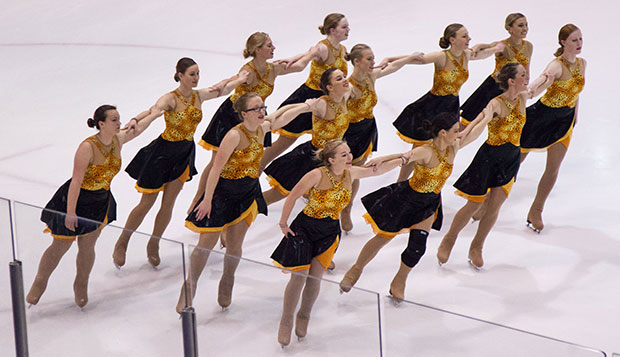 Members of Liberty Radiance, the Lady Flames' synchronized skating team, practice their routine at the LaHaye Ice Center prior to the Feb. 2 Eastern Sectionals in Philadelphia.

"This past year, we did not have any spare cubbies and we had people who didn't have lockers," Payne said. "We had to expand. We definitely needed more space."

Also at LaHaye, the upper-level stands were removed in May and replaced with closed-off storage rooms for equipment for the Flames' five hockey teams and concessions run by Club Sports. From July 28 to Aug. 12, new flooring will be installed around the rink and refined Liberty University branding will be painted under the ice.

"It's really exciting to see the changes over the years," said Payne, who hopes her skaters will breathe easier and not bump into each other as much this year while preparing for a program on their home ice. "The locker room we had before they knocked the wall down was long and narrow. When they took out the wall, that opened up a whole square area which made it feel a lot bigger."

Additionally, with the upstairs Club Sports training room moving to a new facility across the back parking lot from LaHaye, that space can better accommodate the synchronized skating team walking through its programs before a show.

The structural improvements come at a time when Liberty is making a push to elevate the quality of its skating programs.

"We're looking at having 30 to 35 skaters on our teams next year," she said, expecting roughly 15 figure skaters and 15 synchronized skaters, with a few overlapping in both sports.

Among the more promising newcomers are two sisters from Minnesota — Rachel Halvorson, who toured with Disney on Ice for the past two years, and Emily Halvorson, who has represented Team USA at International competitions.

"They compete at the Junior level, based on skill, which is the second highest level you can compete at," Payne said, next to Senior, which is Olympic level.

Both Halvorson sisters have passed their Senior Moves in the Field tests, as has returning junior captain Katie Scuilla.

Other incoming freshmen or transfer students include Adrielle Benner, who is working on passing her Senior Moves in the Field test this summer; Rebekah Hicks, an advanced figure skater who has lived in China for the past several years; Beka Leahy, who has six years of synchronized skating experience; Liz Puffenberger, who has synchronized skated for the past five years; and Jillian Ferguson, who has passed her Junior Moves in the Field test.

The synchronized skating team, Liberty Radiance, is preparing to move from the open collegiate level to the collegiate level this year, allowing the Lady Flames the opportunity to qualify for nationals based on their Eastern Sectionals performance.

"Because of that, we need higher level skaters," Payne said. "They have to have passed at least four Moves in the Field tests, with one being at the Juvenile level or higher."

Juvenile is the fourth out of eight levels, followed by Intermediate, Novice, Junior, and Senior.

Due to the raised requirements, some of Liberty's returning synchronized skaters will join the figure skating team to build up their individual skills before returning to the synchronized team.

The maximum number of skaters a synchronized team can have perform at one time is 20 and this year, its first at the collegiate level, Liberty plans to cap its program at 14 with a couple of alternates.

Payne announced that the theme for this year's program will be "Phantom of the Opera."

The Lady Flames will hold tryouts for both their figure skating and synchronized teams from Aug. 18-19 before beginning practices on Aug. 20 and Aug. 22, respectively.