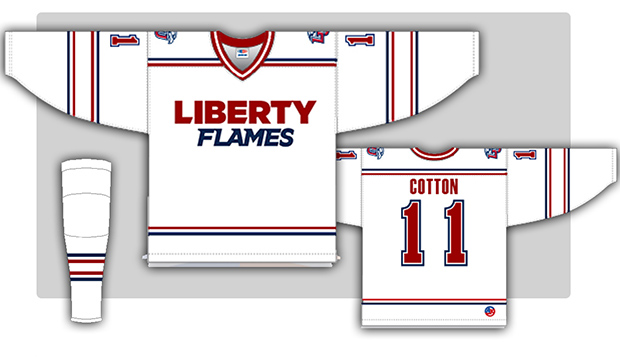 The DII women's and DII and DIII men's hockey teams will wear corresponding jerseys in the 2013-14 season, with the above an illustration of their new home uniform design.

"The university has allowed us to purchase new jerseys because of the logo change," Division I men's head coach Kirk Handy said. "The design's more of a contemporary look. That's a real positive for all five teams and we're super excited about moving forward with a new generation of Flames hockey here for all five of the divisions."

Tucker, who serves as assistant director of the LaHaye Student Union, utilized his talents in graphic design and creative input from Binnie, an assistant coach for Liberty's DI men's team, to develop the new fashion statement for the Flames, produced by the Canadian company Athletic Knit (AK).

"Josh works with marketing with his job with Campus Recreation a lot," Handy said. "He came up with multiple different versions of it and we decided on the best one that we thought would reflect all the programs in a positive light."

"It's a new-and-improved traditional way of doing hockey jerseys," Tucker added. "It has the traditional look to it, but encompassing what Liberty's trying to do with the new branding, it also gives the hockey program a fresh look."

The Division I men's and women's teams will share the same design, with white (home) and university blue (away) options featuring the new Flames Athletics logo as the central image. Jerseys for the Division II and III men's and Division II women's programs also will match, with the "Liberty Flames" wordmark printed on the chests.

"One of the big things we wanted to do was to try to bring the five teams together on this," Handy said. "Instead of creating different identities for all of them, we created two different identities here but also ones that are in collaboration with what the university wants to do moving forward. Every single player that comes in is going to be excited about a brand new home and away jersey they're going to get."

The logos on the front of the Division I jerseys will match the design beneath center ice at Liberty's LaHaye Ice Center, which will be painted the week of July 20-26.

The Flames' DII and DIII men and DII women's teams will debut their new jerseys in live action in September's season-openers.