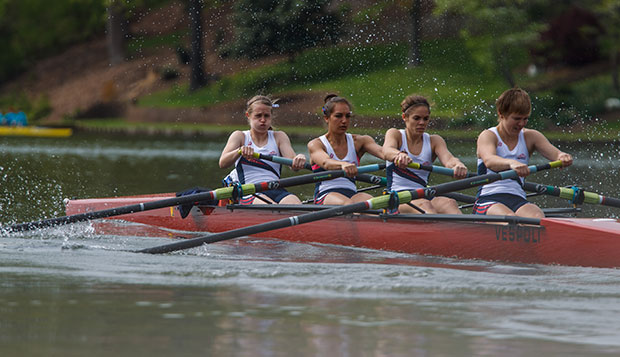 Liberty's women's lightweight four rows during last month's lone home regatta on Ivy Lake. The Lady Flames finished third out of five boats in their heat at the Dad Vail Regatta in Philadelphia.

Throughout the crew season, Liberty University head coach Ryan Hurley tested the mettle of his rowers by pitting them against some elite programs in prestigious regattas.

"It was a pretty ambitious schedule all year," he said, noting the events were especially challenging during the spring championship season. "We chose every race along the way never to duck competition."

This weekend was no exception as Liberty's women's lightweight four and women's novice four boats traveled to Philadelphia to participate in the Dad Vail Regatta on the Schuylkill River, the largest collegiate rowing event in the United States with more than 125 schools represented.

"It was essentially the national championship for all non-NCAA programs," Hurley said, though less than half the teams competing were club-level. "There's some pride to that, knowing if you want to win this, you've got to knock off some NCAA boats, too."

Though the Lady Flames did not make it out of Friday's heats into Saturday's finals in either race, the experience stoked their passion for the sport and determination to come back stronger next season.

"We put them in the fast races not to discourage them, but to get them to have the drive to want to move up to that level and start racing those types of clubs," Hurley said. "I know all of them, when we chatted after the races, have caught a vision for next year and where they want to be. The seeds have been planted."

Both boats placed third in their respective heats.

"The women's lightweight four had a very good race, but in that five-boat event only the top two move on," Hurley said. "Everybody else goes home."

"It was a tough field and there weren't many holes or programs we could pick off," Hurley said. "It was encouraging to know that MIT and Tulsa, both Division I programs, were in the next heat and our time was right on par with theirs."

An injury to regular rower Kate Powell, who experienced whiplash after being involved in a car accident on Wednesday, threw the women's novice four lineup out of whack. She was replaced by fellow freshman Rachel Waldo, an alternate who was activated on short notice.

"Rachel is a lot taller and larger, so we had to rearrange the whole setup of the boat to put her in the middle," Hurley said. "One of the girls who usually sits in the middle had to sit in the bow. That's a lot of changes to throw at a freshman boat in a short turnaround and they had their one bad row all year."

Needing to complete the course in the low-eight-minute range to make the final cut, the Lady Flames crossed the finish line in 8:22, about 12 seconds off the pace Hurley would have expected with the regular lineup intact.

Next up, the men's lightweight four and men's novice four boats will return to Gainesville, Ga., site of the 1996 Summer Olympic rowing events, to compete in the May 25-26 American Collegiate Rowing Association national championships.