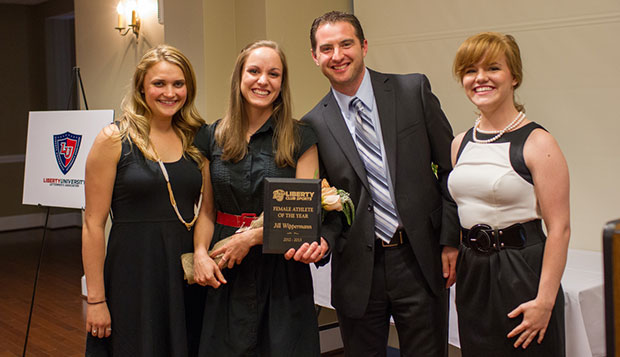 Liberty University's Division I men's hockey head coach Kirk Handy has witnessed exponential growth in LU's Club Sports program in the five years he has served as its director.

Over the past school year, more than 500 student athletes participated in 31 Club Sports. Combined, they competed in 340 total events — 200 at away sites and 140 at facilities on campus or in the surrounding area.

Karen Kittinger, Club Sports program's marketing and special projects coordinator, recognized a few of the Club Sports highlights of the year, featured along with many more in a music video with action clips put together by video coordinator Patrick Strawn.

They included senior 235-pound wrestler Andrew Wilson's individual championship at the NCWA national tournament in Allen, Texas, earning him Male Athlete of the Year honors; senior gymnast Jill Wippermann's sixth-place showing in the all-around at the National Association of Intercollegiate Gymnastics Clubs Championships in Minneapolis, making her the Female Athlete of the Year; men's lacrosse head coach Kyle McQuillan leading Liberty to its first Southeast Lacrosse Conference tournament title and MCLA Division I national tournament berth, distinguishing him as Club Sports Coach of the Year; the 29-3 Lady Flames' women's DI hockey team's rise to the No. 1 ranking in the ACHA DI national poll and advancement to the national championship game to be named Club Sports Team of the Year; and senior snowboarder Eden Jones finishing fourth in slopestyle at the USCSA Nationals at Sun Valley, Idaho, which was recognized as the Outstanding Performance of the Year.

As revealed in the banquet, many of Liberty's Club Sports athletes are also outstanding scholars.

Tatiana Payne, assistant director of Club Sports and head coach of both the Lady Flames' figure skating and synchronized skating teams, read a list of 80 student athletes who maintained at least a 3.5 grade-point average and 10 others who have managed a GPA of 4.0 or better throughout their careers.

Handy also recognized the hundreds of students working behind the scenes who facilitate the program's operations.

"We have 500 student athletes, and another 200 students who are getting experience through the Club Sports program," Handy said. "A lot of it's department driven, working out opportunities" for Christian/Community service.

"We require students to help out in a variety of different ways," said Clark Zealand, assistant professor and graduate director in the Sport Management Department, noting every Sport Management student must get a minimum of four hours of event experience every semester.

The department, which features 500 undergraduates and nearly 400 graduate students, also sets up practicum and internship classes that require 400 hours of service.

"It's great working with Kirk and his staff over there," Zealand said, noting a few Sport Management graduates are now serving in the department full time while pursuing their Master's degrees. "It's a great opportunity for our students to get that experiential component and to learn in a real-world environment. It's a win-win all around."